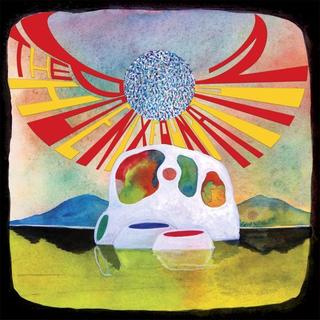 Wellington’s Phoenix Foundation take their name from the bosses in MacGyver; collect fifteen indie points right there. Normally a choice of moniker like that would only tell you the band watched TV in the ’80s, but, being New Zealanders, it also falls in with the country being sealed in a tongue-in-cheek pop culture time-warp. If you’ve ever seen HBO’s Flight of the Conchords, you’ll know how easy it is to make cracks about far-flung Kiwis, each of them portrayed as floundering bumpkins who all drink together back home. Turns out that the Phoenix Foundation are not only on first name terms with folk-clowns FotC—when collecting their Best NZ Group 2009 award, Jemaine Conchord told the crowd the trophy should have gone to the Foundation—but they’ve also had the nod from Crowded House’s Neil Finn, arguably New Zealand’s most famous export next to lambs’ knuckles, bar staff, and Edmund Hilary.

Happy Ending is the band’s third LP and their first to be released outside the islands thanks to the buzz their celeb friends helped generate (not to mention due in part to the soundtrack they provided for Eagle vs Shark, a bittersweet 2007 award-winner starring Jermaine from Fli...forget it). The point is that the Phoenix Foundation are good, good enough to ride a wave of endorsements and then carve their own path from there on. Good and accomplished enough for Happy Ending to feel like a third album done well—slick production, Radiohead chords, shoehorned line-dancing number—that almost certainly deserves fifty minutes of your time if you’ve got an aching sweet tooth for assortments. No, it’s not a typical genre-cramming exercise, but it fairly zips from mode to mode like a pinball being flipped round the alt-pop machine. My favourite is “40 Years,” a track which could easily be the next Kings of Leon hit if only the vocals were more strained, forged in the molds of Surefire Chart Smash workshops were Kings of Leon actually this unsure of themselves. A rousing stew of doubt, guitars and euphoria that’s so right for running the IAAF should gender-test it, it’s just been filmed as a one-take extravaganza that offers a send-up to the opening of Jonathan Glazer’s Birth.

“40 Years” is also the peak of the energy that underpins the whole album, that energy a quaint, self-effacing nihilism that stops “Bright Grey” from becoming ABBA’s “Fernando” (galactic swell/twinkle introductory overdose). Possibly the first opening track ever to jam on the perils of eosophobia, singer Samuel Flynn Scott reports that “The world is bright grey / I must’ve fallen asleep that day / That’s the state of my mind / Oh when are you gonna let me out of the light? / For these oranges and yellows / Are making me mellow no more.” Given that the guys in the band, now a whopping count of six, are planning a move to the UK, sunlight won’t be a problem for long.

Aside from the potential chart interference, the Phoenixes show off some more colourful feathers on “Pure Joy,” whose slinky jazz takes on the character of some downbeat caterwauling Bond theme, right through and back to delicious six-minute shroom opus “Gandalf”—which can’t possibly be a title to take seriously. And while some of the more truncated Moog FX are not safe to play when hungover, the twelve tracks on Happy Ending fidget with all kinds of life, strange tics and quirks nicely shepherded then split into dozens. It soon clicks on that Scott and co. have fashioned a vivid mix, one that the indie-comedy mafia of New Zealand are right to be proud of. You can see why a junta of comedians would take the band so dearly to heart (they say most gag-tellers are only three heckles from suicide, and this record packs pain on top of the hip bits).

Still, there’s a nice twist within a twist to be found in that the last two tracks on the album aren’t particularly happy: “Burning Wreck”‘s louche sophisti-pop and the drum machine dream of “Sugar” are both excellent pieces regardless, but they go far to energize the cliché that the best love songs almost always focus on heartbreak. Some of the best here focus even further, past the body and faltering bloodpumps, to where Scott can air his ornithology fetish on “A Day in the Sun” or where there is Star Trek chanting on “Omerta,” but for the most part Happy Ending is a very accessible picnic of pop-rock autism, one that deserves to cross three continents on only a pocketful of B-list promotion. Bret Conchord, the man responsible for one of the safest quips I’ve ever come across (“She’s so hot, she’s making me sexist. Bitch.”), describes his countrymen thus: “If Captain Cook was to explore the South Pacific in 2009, the Phoenix Foundation would be his greatest discovery.” I put it to you that that’s all the proof you require. Cartographers very seldom exaggerate.