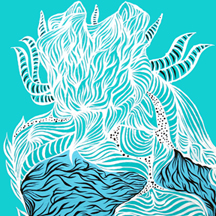 One of Newton’s little-known laws is that the more players you add to a pop band, the more insufferable it gets. The unfortunate corollary, of course, is that it makes Marc Hogan more likely to write about you, CMJ festival bloggers go nuts, and bands like Black Kids get signed to major labels. Admittedly, there are a few exceptions to the rule—Belle & Sebastian often reach into double-digits, and Broken Social Scene made its name on an expansive rotating lineup—but San Francisco eight-piece Photons aren’t one of them. On their self-titled debut EP, they bill themselves as a happier Joy Division (already an ill-advised move, because, y’know, New Order), but for better or worse land closer to their ’08 contemporaries. Like the rest of the neo-twee that passes for “indie pop” on the Hype Machine these days, they’re led by a singer who makes every effort to funnel all the worst parts of Robert Smith through a uniquely American inability to enunciate (see also: the Killers). The music fares somewhat better: “This Must Be Love” chimes and thumps with the basement beauty of the Arcade Fire, and “Something Left to Live For” sprinkles tinkling Glockenspiel notes over vicious guitar stabs.

Still, songs such as “Animals” get lost between lo-fi and “London Calling,” and a muddy production job doesn’t do the tunes any favor. Neither does the band’s awkward aesthetic, which is never sure if it wants to turn up the amps and strum like the Strokes or fiddle with its clarinets and choir harmonies. Photons’ songs sway between cutesy and heavy, like a hipster torn between shutter shades or a chest tattoo; either is infuriating, but both would be worse. It’s a matter of too many chefs in the kitchen, yes, but the bigger problem with these bloated bands—which find excuses to let everyone sing, or worse, fist-pump—is that the genre’s hyper-sincerity necessitates a more solitary effort. Phil Elverum singing about a voice in headphones is convincingly, and movingly, child-like; dude from I’m From Barcelona singing about his treehouse while twenty-something like-minded adults jam in the background sounds like a parent-teacher conference day at kindergarten. It makes a mockery of twee.

Now, Photons seem serious enough, and under better recording circumstances, they’d probably play rings around their less credible blog-brethren. A song like “This Must Be Love” is promising, especially for a debut EP—but given that debut EPs are basically sophomore albums these days, potential rarely gets to come out and play. More importantly though, the band and their peers should consider the math: do you really need eight people to play on a four-track? Don’t they teach anything in school?