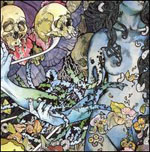 Is “Girl in the Slayer Jacket” a hint that Pig Destroyer likes Buffy the Vampire Slayer as much as I do? It’s not quite clear from the lyrics, but if the naked zombie anime women on the cover are any indication, geeks. Although, not geeks like me, since I’m annoyed there are naked zombie anime women on the cover. But good job, guys—somebody was nice enough to draw breasts and asses and vaginas and lips (but no eyes) on your album cover. Hentai kids everywhere are having wet dreams to “Waist Deep in Ash” (kinky!) right now. Watch them stare at your cover and be witness to everybody’s favorite fetish: earth rot rape (the presumably male hand that rips through one of the women’s bodies is holding its own bone, so it’s apparently raping and getting off on watching itself rape. Just.lovely). And vocalist JR Hayes will tell us our “legs look so sexy out of context.” Wait? You just meant the women in your audience? Are there going to be women in this audience when apparently the most prevalent image in the music is the mutilated female body? Are you just pissed off that Buffy could totally kick your ass? Or should I just not be surprised since guitarist Scott Hull used to be in Anal Cunt?

This is a band that used to count itself as a political act, but, really. “Pig Destroyer”? Calling out cops is the biggest political threat you can make? But I guess I’m wondering if Pig Destroyer’s trajectory from stalwart Virginian deathgrinders (who often played 10-minute, highly-political sets) to metal meatheads has been dictated by a desire for greater attention in the metal community. Because as much as the music on Phantom Limb is pretty technically amazing—if at times this Limb too holds its own bone, wanking off—the lyrics are often (though not always) too mired in their own three-sorceror’s-secrets-past-Fred-Durst indulgence in serial killer metaphors to allow me too much traction. Like, a lot of music is sexist, I know, but that’s not really an excuse for metal. Especially since most music’s (deplorable, gross) sexism is at least grounded in (deplorable, gross) reality. That doesn’t make it any less gross or deplorable, but what is it with metal following graphic novels and anime down the mythopoetic road to create worlds where sexism is not only a-okay but actively embraced? And, no, tongue-in-cheek is not a suitable defense here. This shit revels in dismembering.

Sad, because the songs where the body-as-pin-cushion metaphors are done away with show a band with the ability to crunch lopsided on-a-dime numbers out effortlessly, swirling through the fourteen songs on the album in just a hair over 30 minutes. And while the formula isn’t exactly flexible, the music is, its elasticity the primary attraction. Musically I’d say this is about as good as hardcore/metal hybrids get (whatever sub-genre to lob at ‘em). I just really wish these dudes would get some new metaphors and stop grabbing their own bones in front of me.