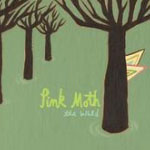 Like a bastard offspring of Will Sheff’s rock throwback Okkervil River and Roommate’s lyrical walkabouts, the Torontonian Pink Moth seem to pupate fully formed to offer ineffably plain and plaintive and mournful song. “We cursed the flowers first for growing / then for dying,” Ray Cammaert sings on the album’s aesthetic declarative “Forest Fires,” and its tragedy is so matter of fact and arrangements so patient one would think they were hearing an older and more experienced songwriter than this.

Such is the paradoxical realities of playing and watching music in Toronto, a scene so rich in talent that a band like this can put out a record as mature and effortless as The Wild and fly so completely beneath the radar. Other than some meager exposure for beautiful “The Long Grass” on CBC Radio 3, Pink Moth are looking up at the mountain of similar acts and a listener base whose patience for music requiring some modicum of consideration is thin at best. Minimalist, careful, and with enduring songwriting, Pink Moth may be an echo of the kind of indie rock not yet canonized into classic status, but already half-forgotten by those of us more enamored with the sheer sonic size and scope of our Animal Collectives and emergent lo-fi scenes. Songs like “Lucky Numbers” deserve our temporary attentions, hesitant though they are to appease more immediate appetites.

What’s surprising is that songs like “Minnows” or the gorgeous “Carnival Girl,” which should by all rights turn into absolute dirges of melancholic beauty, remain so light. At no point does Cammaert insist on a radio-ready, upbeat tune on which the band can reliably fall back, but the album remains as dynamic, accessible, and melodic as it is staid and serene. He relies even less on the recent trend of the anthemic crescendo, the stories-tall chant, and as such the music remains uncomplicatedly, unpretentiously tuneful. The charming plunk of “Jackals” would find few homes with many of the Toronto scene’s more self-inflating acts.

The album’s tendency towards rusticity can become a mite predictable, though it remains so professionally produced and so tightly controlled that even those gestures read natural, less stylistic hoops through which Cammaert is jumping as strategic songwriting decisions. And its for those reasons that, as a debut album, it’s difficult to conceive of The Wild being much better. This is the sound a tight songwriter at work, ego evidently in check and direction soundly plotted. Whether the emergence of artists like this is a natural byproduct of a scene so vibrant as Toronto’s or that scene will someday become subservient to its established artists rather than trends remains to be seen. I’m hoping Pink Moth remain a part of that discussion.