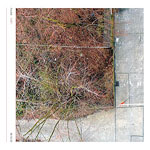 I wouldn't exactly call it funky, but Pjusk's Sart, in a similar fashion to Phonophani's incredible self-titled debut (1998), is one more step in the conversion of 1994's Selected Ambient Works II's austere minimalism to something of richer, deeper tones (you know, without that scratchy feeling). But also something of nearly equal compositional integrity. In other words, it seems a lot less self-consciously involved with Terry Riley or Karlheinz Stockhausen than Aphex Twin's more subdued material; it just wants to trip you out as much as anything. Still, I'm sure some would consider it something of a dry experiment: it moves at a funereal pace, its beats are strictly minimal and never move with what you'd really call momentum. The insular universe of Sart is well worth the investment, though, and for every out excursion you get something as immediately gratifying as the deep bass hum (which makes me wish I had good subwoofers) of "Flyktig," literally vibrating your body while haunting synths and almost-imperceptible tweaks dance in and out of your grasp. It's like listening to anything else on the 12k label (the project of master microsound artist/photographer/designer Taylor Deupree) while getting a Shiatsu massage.

The range of tones present give Sart a warm, insular feeling -- a nice alternative to the colder textures that most other Norwegian experimental acts offer -- but for something so dense in terms of an overall range of sounds, it also feels remarkably light. The bass tones, rather than grounding out the tracks, serve to briefly illuminate a sense of form and shape, only to retreat back into the shadows. In this sense, Pjusk deal in the language of dreams, making music that consistently evades meaning. For every tactile glitch, the music draws your attention to the negative space around it, creating faint impressions rather than concrete sounds. Even the taut two-note synth that loops throughout the first half of "Myk" is subtly tweaked to create the sensation of being closer or further away from the source, the spray of gentle overtones giving the impression that the solid notes are slowly dissolving in water.

Elsewhere, tracks like "Kontur" and "Rav" -- where the synth loops and low-end rhythm are abandoned all together -- are nearly maddening in their sense of distance and lack of discernible melody. I can accept that this is part of the point, however: these tracks manage to be hypnotic without ever really announcing themselves, which makes sense given the overwhelming sensation that Sart works on a subconscious level. Still, I prefer tracks like "Anelse" or "Rom" in which, much like Gas, Pjusk play with simple loops and 4/4 beats without ever sounding remotely like techno music. Unlike Gas, however, the beats fade intermittently into free-form ambience; the tracks constantly shifting in unpredictable ways and never really settle. The fact that there's little to ground any of these tracks puts Pjusk in danger of chasing their own music down a rabbit hole, sure, but it's never very boring, which is kind of a marvel in itself.