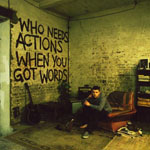 Who Needs Actions When You Got Words

Ben Drew cut a solitary figure amidst the vainglorious monkeying around of this year’s NME Shockwaves Awards ceremony. Alone on stage, in guise of Plan B, the 22 year old talent, scouted from BBC’s “Talent of 2006’” competition, strummed a succession of drawn out melancholic chords.

I couldn’t find the remote.

What happened next was surprising, to say the least. Coming off as the Anti-Blunt incarnate, “No More Eatin” is envenomed by similar inner city motifs to those previously explored by Dizzee Rascal, as Drew spits out a succession loaded threats: "‘You just made the biggest fucken mistake of your life. Blud!’’

Factor in the fact that he’s white and, only a couple of months later, he’s being paraded as the UK’s Eminem. This recently released debut, Who Needs Actions When You Got Words, does nothing to skew or attempt to subvert those parallels and, as a result, disappoints. Sure, he plays up to the tabloid press’ irrational worries that the youth of today is going to pot by conjuring up a series of grim urban vignettes, littered by pregnant teens, dosed up teens and killer teens. Drew’s fatal mistake, and missed opportunity is to fail to draw a division between narrator and subject, always placing him as the egotistical centre of the unruly event at hand. Consequently, much of the album comes off as childishly po-faced, as Drew, in opener “Kidz,” having gone through the mechanics of smashing somebody over the head with a glass bottle, comments, “It’s not like I’m going to get caught / Anyways, committing crimes is like a fuckin’ blood sport.” The whole album seems to be a continual re-hash of the same vibes explored in these opening seconds, and, unsurprisingly, it becomes apparent that this is no case of exploded, bottled up feelings. The violence is casual, the situations gleefully morbid, the delivery grating.

Pretty much no avenue is left unexplored. “Mama,” with its ineffectual rhythmic guitar flourishes, is a weak melody eaten alive by a story arc concerning Drew lambasting his mother over her relationship with a crack addict, and implied complicity in underhand narcotics. This is not Sunday morning listening material. On a lighter note, the video acts as a peculiarly British, probably unknowing skit on the unintentional comic magnificence of Killa Season. At least Cam’ron has his magnetic flow and a couple of insane production jobs; Drew, with all credit to him for being the solitary driving force behind the record, is marooned with some amateur, almost skittish beats and a delivery that seems to stop and start in a herky-jerky gelatinous conglomeration of garbled syllables and odd elisions. His delivery's certainly interesting, but lacking the nuances of and empathy of, say, Mike Skinner, it's best deployed when not framed by anachronistic loops. The guitar-based track “Sick 2 Def” is a lyrical coup de grace, not so much a song as a spoken prose-poem filtered through the sewers of the gutter, the dirt thrown to the wind’s eyes.

That said, the songs work best where Drew subdues the mostly underdeveloped melodies, as on “No Good,” the instrumental track led by an addictive percussion sweep. It’s hard to shake off the aura, though, that the record, for all the accomplished and jarring talent contained within, is no more than a steaming pile of embellished naivete, lines like “I don’t just talk the talk – I walk it" coming off as admirably simple, but ultimately silly.