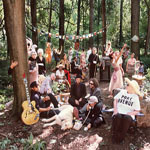 Plants and Animals’ For/Avec EP has at least one surefire moment where one’s eyebrows find their hairline: when the listener realizes that three white dudes are covering a Nine Simone civil rights narrative. And right there, in that potentially alienating instant, these hippies prove that they have the stones to live their love for the music (The Music, man!) more fully, with all the risks and generalizations that that entails, than their contemporaries.

For their full length debut the trio keep the concept similarly trim—that is to say, of the sort of insights that offer “it takes a good friend / to say you’ve got your head up your ass”—while expanding their songwriting scope to refer to what is probably a deep, hearty record collection. “Bye Bye Bye” opens the album with the kind of choral ensemble you’d expect Bono to unveil as his pièce de résistance; “Faerie Dance” and “Feedback in the Field” are feel-good jam rock of low demands and high rewards. For every instance of noodling one is also met with the canonical, as much The Band or Fairport Convention as a jazz guitar excursion.

But the truly masterful work is to be found in the production, which here is nuanced yet dense, appropriate and yet original. This three piece often rely on just two guitars and an undersized drum kit while playing live but they use an array of instrumentation here with knowing prowess. Strings and piano are accoutrement rather than hyper-extended gesture or overcompensation when bereft of songwriting ideas, humming alongside the mix rather than dominating it. The softly padding drums in “Good Friend” do nothing to belie the cacophonous syncopation at the end of “New Kind of Love” or the hand-clap freak-out of the lovable “Mercy.” Each element is wholly balanced in the mix and treated without novelty.

Parc Avenue often strays too far into excess and departure for departure’s sake to enjoy the brand of a songwriter’s tour-de-force. “Faerie Dance,” “New Kind of Love,” and “Guru” all stray close to or north of seven minutes, often crashing through multiple songwriting ideas before settling on a coda. But as a fully realized and lovingly sculpted aesthetic, there may be few stronger full-length debuts waiting in this year’s wings.