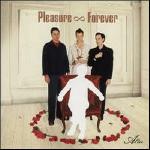 Ah, the piano. I played it for over 10 years of my life. The bands who don't know how to use it are many. Most use it with the impression that if they're using a piano, well then "the song MUST be super-emotional-moving! It's a PIANO after all!" They are of course dead wrong. The piano is a beautiful instrument, to be sure, but criminally abused. There'd be a lot of flogged asses if it were up to me.

There are the exceptions to be had, though. Take The Walkmen, whose simple but innovative use of a piano that sounded like it was coughing up dust helped to make their most recent effort, Everyone Who Pretended to Like Me is Gone, a top 20 band in 2002.

Really, though, when it comes to rock, I like the clever pianos. The ones that can be gleefully sinister. The ones that aren't used for "here's our sensitive/sad one" pieces, but for the potentially naughty pieces, the dark ones. Even more simply though, they have to be played well. No single-key, easy melodies unless you've got the melody of the year. I want pizzazz, I want some measure of complexity. Though it's so obvious that at this point it almost doesn't need to be said, Pleasure Forever have got it down. From the ominous Russian cabaret vibe in "Czarina," keys bouncing up and down like a bobbing Russian dance, to the dark but lovely lilt of "Draws An 8," Andrew Rothbard composes piano lines with sinews of meanness, lecherous, snide charm, and ultimately, dark prettiness. Think The Walkmen meet Interpol and the Strokes in a back alley for a bust-up, but accidentally just kick Our Lady Peace's ass.

But the quality in Alter isn't to be entirely attributed to those blackly charming piano chords. At the heart of Pleasure Forever's music is a dirty, cigarette-smoke-haloed, devilishly messy guitar rock ethic. And Rothbard's vocals, distorted with fuzz and profligacy, is only part of the equation. The occasional jangling guitars that wring themselves out over the piano and bass have a mean streak, often bleeding with distortion as well, with chugging chords for teeth, or slithering, single, not-so-clear lines.

"Wicked Shivering Columbine" is the real standout here, and that it doesn't use any pianos speaks to the fact that though the album is heavily inlaid with them, the soul of it is that nasty guitar rock. Spinning off into the stratosphere with a whiplash of an electric riff, it thunders out after the initial tease and dips in and out of explosive distortion until its keyboard-accentuated, mounting climax gives you one last punch in the gut before leaving you hobbled in the wake of the mod characters in the absurd cover. "Hymn Harmonia" picks you back up with its dirty piano licks, and you're thrown back into the thick of things.

Pleasure Forever only leave a few angles for me to pick at them. The first is the constant distortion of Rothbard's vocals, which can border on the tedious. His sneer can become a bit overbearing over the course of 46 minutes; I wish it didn't end up as trying as it is at times. The second is their occasional bland bass line, which while not damning, can be disappointing in the context of great songs like "Aeon Flame" and "Wicked Shivering Columbine." In a couple songs, including the otherwise wickedly entertaining "White Mare," it could do with just a tiny bit of extra spice. Finally, Pleasure Forever do at times sink into a little bit of overindulgence. They are heavily conscious of the atmosphere they create, the character they project, and sometimes they steep themselves so far in it that they can tend to forget themselves amidst their filthy riffs.

However, these few minor faults cannot obscure the daring, yes, even original sound of Pleasure Forever. Alter is the pretty girl that will stab you in the back and sleep with your little brother, it's fashionable assassins with dirty habits, it's a licentious kick in the ass that's massively entertaining and wonderfully sinister. It remains to be seen where these boys will go from here, but they've got enough ideas going so far to make the future look delightful, in a gritty, gloomy sort of way.