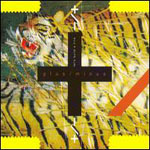 Cheap joke: this band is musically bipolar. On 2003’s You Are Here, they mingled with both an interesting Postal Service/Her Space Holiday aesthetic (“No One Sees You Like I Do”) and a boring Death Cab gone wrong one (“Here We Go [Again]”). On this album, they choose to one-up themselves, siding with the “minus,” and plowing full-on into Death Cab gone wrong gone worse territory. And I’m not an anti-sentimentalist or Death Cab hater. In fact, on my initial listens, I found myself comparing this album to some of the finer, more heartfelt moments of Nada Surf’s The Weight Is A Gift (2005), an album I love.

But eventually that comparison wears off like cheap shoeshine. Nada Surf they ain’t; +/- have ended up more in the direction of Rogue Wave’s Descended Like Vultures (2005), in that both albums seem to squander the best aspects of the band for a couple of excellent girlfriend mixtape songs, some crafty production, and a whole lot of filler. +/- have abandoned their bipolarity, which I was willing to call “complexity” or “potential” until just now, for a straightforward record that yields none of the possible benefits of a straightforward record.

And while people will likely say that this album marks a “shift in direction” for the band, these seeds were firmly planted in the last album. To be sure, a few of those listenable mixtape moments pop up. Among these, “Steal the Blueprints” is the finest, (the un-ironic “The Important Thing Is To Love” as runner-up), and though “Blueprints” is almost literally based on a Death Cab blueprint, it also hosts the album’s best melodies and most straight-up indie rock instrumentation. If the move was toward a more “band”-oriented sound, then this is the direction they should have gone, rather than retreading the swill from their last record.

The obvious connection between this album and You Are Here is the “Summer Dress” song sequence. “Summer Dress 1 (Winter Clothes)” is a forgettable acoustic song that marks the direction that the band has decided to embrace full-on. This first part of the series focuses on clothes as representative of the small (and large) details that comprise relationships. The memory of the summer dress she wore when she left you, the metaphorical significance of her throwing out her winter clothes when she is finally, completely gone. It’s cliché, sure, but a suitable enough soundtrack to bedroom misery.

In “Summer Dress 2” the song gets “cleaned up” a bit, both in production and goofy parenthetical subtitle: “Iodine.” This is, quite literally, a sequel, with the girl now returning and wondering if she did the right thing. Of course she didn’t, but the song is a sad, self-forgiving male fantasy that is at once offensive and absurd. She comes back with ribbons in her hair (“cause that’s how he likes it”) only to find that he is a troubled guy who can’t give her what she wants, etc. The story is one that translates easily for the listener or critic, where we get played for hoping, in our hearts, that +/- had more to offer. They romanticize that. We shouldn’t.