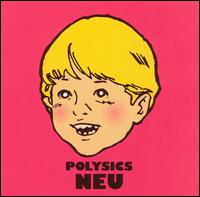 FUCK I love the Japanese. Jesus flipping Christ. Japan is, in my opinion, the single, most neglected fertile field of ridiculously awesome music, at least in terms of what we get in the States. Sure, we occasionally get the genius tidbits from avant-garde gargantuan head- splitters like Boredoms, but so much other great stuff is percolating a few thousand miles away that it nearly explodes your head.

Oooh, there's the segue: that's exactly what Polysics want to do. Explode your head, so that your brains cling weakly to the walls while still quivering with blistering spaz-rock orgasmic fire.

will absolutely fucking destroy you if you don't take a bunch of deep breaths and square your feet for it. It will lift you up, and proceed to thrash your helplessly flailing limbs about the entire room, reducing you to a smoldering pile of ash that would just kill to reach up to the stereo and hit repeat.

If you're faint-hearted, then RUN. If you're not, if you've been practicing by listening to Panthers or The Rapture, or even fellow Japanese headfuckers Reveille, then you might be remotely qualified to listen to Neu. If you love Boredoms, make sure you grab a bunch of tissues before you start this mess of genius playing.

Opener "Go Ahead Now!" will let you breathe (sort of - we're talking as much room as Polysics can allow in good conscience) for all of 26 seconds before someone screams "1,2,3,4!" and an all out assault of bass, rhythm, and guitar tornadoes explodes out of the quirky little video game synth effects, and decimates you. Hooks made out of nuclear bombs fly forth from Polysics' arsenal and just barely you can hear the howls of who the fuck even knows under the butchering mix. The opening track is just one of several which would alone be worth the price of admission. Most bands try to squeeze out two or three of these blistering bitchslaps in an album; the Polysics do it all night…I mean album, long. And if you have the stomach for it, you will flail like the Polysics demand.

But doesn't a record like this get tiring? How much face-shattering assault before you end up neatly shelving the album away, thinking, "I will bring this out again, one day, to pump me up right before I become the overlord of the world"? Um, I don't know, a whole hell of a lot?

The reason is that Polysics, in all this furious fun and hysteria, have great hooks, and most of them come from their bass guitar. Everything else is pure energy, raw talent, and vicious guitar/rhythm interplay. The guitar dreams of Brian Eno fused with the whipping cleverness and energy of Brainiac, all filtered through Polysics' shredding machine - while John Schmersal is busy dawdling with downtempo Enon fodder, Polysics are not only taking his throne, they're making a parade around his house and, fuck, while they're at it, every hipster's house you ever knew, and dousing them with gasoline. They don't even need a lighter; their guitars are blowtorches enough.

The only break in the relentless assault is the fuck-you cool of "What," which arrives lightly after the kick-your-teeth-into-your-face beatdown breakdown of "X Rays (This is my Life)," which, by the way, has a bass hook so brutal that it will nail your family to the wall and napalm your dog. "What" is the Enon song that escaped Schmersal, but in Polysics style, the vocal section alone has the same kind of avant-garde confidence that permeates every living cell of this album. The Polysics brand-name, from their quirky electronic effects to vocal manipulations to confident bass lines, to insane guitar work, is all over everything on Neu. One listen to them, and you realize that you could never be nearly as good as they are at this whole spaz-core deal. The closest you'd get in a battle of the bands is getting up on stage and peeing your pants. They're that good.

There are only a couple minor faults with the album. The first is that the production can't quite isolate all its elements perfectly clearly. Admittedly, with this much furious interplay going on it's hard to keep any kind of control over the sound. And to be fair, it's done expertly almost all the way through, but sometimes that killer guitar line you might not realize is there is just barely getting smothered by the sonic assault. It's a blessing that it happens rarely, because most other times the most important elements are obviously put out there; in fact, they're splintering your door. The second flaw is that the album does have a couple not-so-hot tracks, an expected consequence when you try to keep up such furious rhythm and energy for the duration of three quarters of an hour. In trying to vary up the rhythm here and there, a couple missteps are made; "S.V.O." suffers from a jagged pace that limits the amount of substance that the Polysics can fit amidst attacks of drum fills. The song kicks into a killer 30 seconds after two minutes of staggered drum fills that leave little room for anything above screwball effects antics, but the song is only two and half minutes to begin with. Thankfully, "Making Sense" more than makes up for the blunder by maintaining a strong tempo while allowing for more interesting elements to play around. These few missteps are wholly unable to make any significant dent in a collection of songs that are ridiculously fun, energetic, quirky, and put together with remarkable skill.

So while we dropped some nasty bombs on Japan several decades ago, it doesn't take much time to admit that, at least musically, they're dropping magnificent clusternukes of sound onto our unsuspecting candyasses. And boy is it a joyride. Will it exhaust you at times? Yeah, sure. Not all of us have superhuman tolerance for noise-rock pleasurepain. It might even be called, at times, overbearing. But without a shred of doubt, at the end of the day, you won't even care that your brains are mashed all over the walls, so long as your ears are still intact to listen to more. Maybe not now, maybe not tomorrow, but when the delusions of world domination come, Polysics will back you up with the heavy noise artillery and honestly make you feel like you could thrash the world's ass. Excellent.