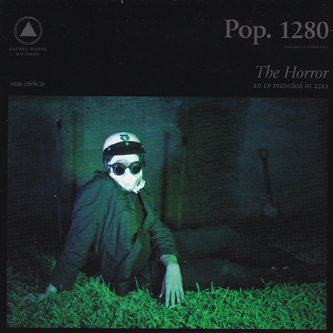 Over the last couple years, Brooklyn’s Sacred Bones Records has risen from regional curiosity to national concern on the back of an ideologically sound stable of artists and a unified visual aesthetic, priding themselves on community and collective vision. The breadth of this vision has remained impressive, ranging from the slow-burn psych of Amen Dunes and Psychic Ills to the expansive hardcore of the Men to the gothic electro-pop of Zola Jesus, but a uniquely macabre thematic streak has helped crystallize the imprint’s MO.

New York City noise-rock quartet Pop. 1280 fit the label’s maxim to near perfection, and in the wake of the Men’s blistering 2011 missive Leave Home, stake legitimate claim for Sacred Bones as the preeminent destination for US avant-rock. The band’s full-length debut, The Horror—from name on down—continues to build on a very specific strain of the label’s corpus. With a dark, uncompromising foundation in the artier, industrial end of East Coast guitar rock—think Cop Shoot Cop, Swans, and more recently Liars—but with an ear toward the uniquely Midwestern provocations of the Jesus Lizard and Killdozer, Pop. 1280 have a firm grasp on the sonic lineage they hope to sustain.

Engineered by like-minded compatriot in industrial assault, Ben Greenberg (Zs, Hubble), The Horror revels in a very primal template of serrated guitar, scorched-earth synth, bowel-loosening bass, and primitive percussion. It’s got the live, kinetic feel often associated with the recording work of Steve Albini, but an air of claustrophobia keeps things hermetically sealed, as if the band can barely see past its own humid maelstrom. The band plays with tension and structure with a discernment which belies their youth, but nevertheless there’s little room to move here, such is their dedication to atmosphere.

Befitting a band named after an unassumingly bleak Jim Thompson novel, Pop. 1280 exert a murderous force with a similar sense of unprovoked vengeance. Theirs is an equally pulpy display of grisly imagery and unsettling narrative, bled through with a curious preoccupation with human exertion of animal instinct and amoral sexuality. The first words uttered on The Horror are “Two dogs fucking / Digging for gold,” and from there they conflate notions of the innate and the carnal, the human and the feral, across a number of the record’s ten tracks. It’s an impressively committed if not exactly revelatory tact, yet the best moments on the record find the band matching the savageness of their words with the intensity of their instrumental attack.

Opener “Burn the Worm” turns its title into a mantra as guitars stab at odd angles and the drums pound out a threatening aural march toward an ambiguous state of oblivion. Vocalist Chris Bug punctuates the track with a kind of bleak thesis statement as he pronounces that “Life after death is a painful life.” That may very well be the case, but Pop. 1280 don’t sound like they’re going down without a fight. “New Electronix,” perhaps the record’s single most punishing track, follows in unrelenting stride as synth and guitar shadow each other, more or less suffocating Bug’s vocals as they redline the mix. They devolve into their first in a series of more methodical tracks with “Nature Boy” (not, as far as I can tell, a Ric Flair reference), perhaps poking fun at the narrow functionality of their music with a central edict—“Hips to the right and hips to the left”—so divorced from any sort of audience/dance facilitation that it can’t help but be read as a joke.

For the most part though, The Horror turns out depictions of grim ritual and consequence in a manner felicitous to its title. The self-explanatory “Bodies in the Dunes,” “Beg Like a Human,” and “Hang ‘em High” all marry depraved behavior to appropriately lacerating guitar riffs and guttural bass lines. But they also accentuate the divide between the album’s vivid narratives and some of less defined cuts. “Cyclotron” and “Dogboy” certainly continue with the record’s thematic and aural preoccupations but leave less of an individual impression when divorced from the proceedings. They also contribute to a moodier mid-album stretch, but the former ultimately can’t hang with the pummeling four track opening sequence, while the latter suffers when following the thematically similar centerpiece, “Beg Like a Human.”

Their conviction is palpable throughout, however, and by the time of the awesome closing trifecta, which once again finds the band flexing its muscles and firing on all cylinders, the album’s structural arc becomes more evident. As with most Sacred Bones releases (and per the album’s artwork), The Horror plays best when taken as a two-sided listening experience and for a debut full-length, it’s notably assured. So much so that a lyric such as “I might need someone to cut me off,” from closer “Crime Time,” plays more like a threat than a request for intervention. Which, honestly, is an exciting prospect in a time of tired nostalgia and laissez-faire artistic dispositions. It’s a confidence that Sacred Bones and their artists carry like a brand, and The Horror is one of the label’s most tenacious offerings yet.