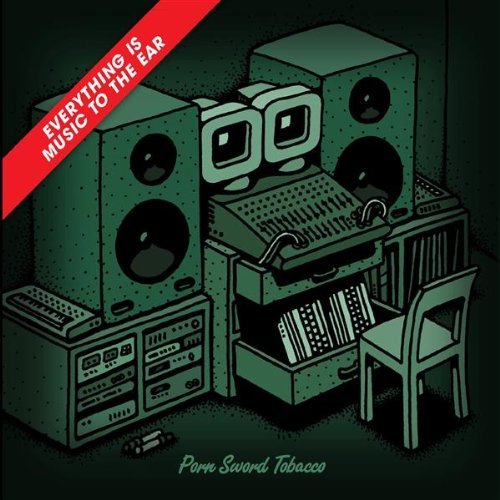 Everything is Music to the Ear

I fucking love Porn Sword Tobacco, so you’ll forgive me if this review’s a little smitten. Artists who carry you through your first acid panic are bound to be expended some loyalty, but when you’re lucky enough to lose your shit to Henrik Jonsson’s psychotropic candy floss, you’ll understand how he fathers such disciples. I mean, you could get high on his track titles alone for chrissakes (favourite to date: “Nah, He Vapourised!”), but with 2009 seeing a mini-Taming of the Retro Nerds in the shape of Casiotone for the Painfully Alone going grown-up, I’ve been worried Mr Tobacco will go similarly civilised, move to Hollywood and start wearing blazers. He’s shown he’s got the power on 2007’s New Exclusive Olympic Heights, which I’d have sworn he wouldn’t outdo even in a month of Sundays.

Well, it’s Tuesday. Everything Is Music To The Ear (can’t you just hear the Swedish accent shining through in that name) is probably his richest record to date but also the most cheeky, perfecting his trapeze act from heartbreak to farce as neatly as he’s ever attempted. Yes, his move from his bolthole in the forests of Värmland to the lights of Berlin might have altered things—goodbye short walls of analogue fuzz, hello horror movie textures (“Den Kalla Handen”) and ridiculousness (“The Lavalife”)—but this isn’t his bid for X Factor, not at all. Having scored every nook of ambient bizarro on his three previous releases, Everything is precisely that: a widening of Jonsson’s appetite for source material. In fact, it was on “The Lavalife” that he first really sold it to me: eight tracks in and it’s the first beautiful piece on the album; a field recording of some LA meth-head set to a chorus of swirls. The Porn Sword philosophy has long been to replicate “a broken radio tuned into a station playing the most beautiful music you have ever heard in your life” and Jonsson absolutely kills it with that recording alone. If Berlin has tamed him then it’s done a fine job.

As with it’s predecessor, it takes a few tracks before you get to the record’s meat. “I Love Riding My Bicycle”‘s itsy little pulsar riff spawns meek but escalating drum lines, a reward for the ghosts and jingles you’ve had to endure beforehand. Reverie remains very much central to the Porn Sword agenda, though, and the chances are if you didn’t grow up watching wood-finish TV then you’ll only hear seventeen logotones. However, Everything has an advantage in that it’s the perfect introduction to Jonsson’s world, with a deeper palette of sounds to seduce the first-time listener. You get a dim wedge of house on “Casual Claude (Birthday Mix)” where dark, looped sequencing mirrors the theme tune to Sharky & George, contrasting nicely with “Den Kalla Handen”‘s pellet of instant drone—a murder mystery in 41 seconds. Could it be that this chasing of constant variety is producing a lick too much soap, just slightly too many airbrushed corners? Nah. This is the first PST album I’ve enjoyed in one sitting, and anyone new to his wonky electronica will be even more likely to do so—even if the music doesn’t do it for you, you can at least lay bets on what he’ll next pull out of the hat. “Cave 4b-50 Clicks Northwest”...well, with a title like that it was only ever going to sound like a Super Nintendo load screen pressing DEMO on an electric piano, but it flows alarmingly into the outward delight of “My Week In Zambia,” with its crystal pads and Speak & Spell. These nuggets might promote an early “happy album” verdict, but all the optimism in China can’t prepare you for the dejection of “From Plural To Singular”: hazy, pained and dripping with sadness, clicking like the greyest of tides. Life’s just an extravagant tragedy, isn’t it?

There’s a fantastic sense of homecoming to Everything is Music to the Ear, and Jonsson holds court nicely without any of his sentiments congealing. Yes, he does still allow himself the odd indulgence (I hope you like pianos recorded on appalling equipment) but the boy still knows his roots, and when he airs them he can out-punch bigger rivals (check “Hästen Som Sprang När Och Vart Den Ville”—could easily have come straight from Saturdays=Youth [2008]). It’s nice to see the adjusted approach of more bones, less gas paying off, but be warned: in many ways this is Porn Sword Tobacco’s Public Enemies (2009) in that it’s precisely what you’d expect from the mind of its creator, with no outright peaks/troughs, and that’s a good thing. While the more tapped amongst his fans might demand a return to the spectres of his first EP, it’s nice to see his founding concepts rendered here in such soothing shades of melody. Diversify, fuckers. It’s how we move on.