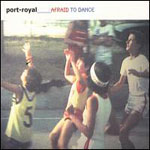 There aren't a lot of actual bands that make music this close to electronica. Music this tightly produced usually ends up the work of one or two people, and unless Afraid to Dance was made entirely in the studio, this Italian four-piece must share an incredible synergy. It's easy to see how Port-Royal would be pegged as post-rock with their mix of live instrumentation, electronics, and various found sounds; however, without the exaggerated dynamics of M83 or Godspeed You! Black Emperor, the band seems to be steering the genre closer to the ambient techno of M·m or Boards of Canada. The atmospherics that characterize most post-rock are still there, but this band finds their moments of zen in gorgeous interludes of carefully-controlled ambiance. The amount of restraint on this record is impressive in itself; despite the similarities to techno in their use of simple synth or guitar patterns and organic shifts in rhythm, Afraid to Dance is as far from the dancefloor as the title suggests. Even on tracks like "Anya: Sehnsucht" or "Deca-Dance," where things are kept fairly mid-tempo, the album is come-down music through and through.

If electronic music is a genre predicated on the use of available technology, than Port-Royal are certainly contributing something, even if the music itself isn't always entirely absorbing. The band seems to have taken a page from the book of Graham Sutton: they attempt to see how much varied instrumentation and effects they can fit within a distinct approach to production-in this case, a singular ambient haze. Like Bark Psychosis, Port-Royal's strength is in their ability to make sounds that might be abrasive or out of place in most contexts sound lush and un-intrusive. Most of the individual elements aren't particularly revelatory in and of themselves-guitars that mostly sound like guitars, and drum machines that could've been lifted from early Aphex Twin records -- but they're combined in distinct ways with haunted vocal samples and synthesizers rising faintly above the mix only to retreat again.

It's easy to see how, absent of any specific emotional platform, this could be seen as boring or lifeless. Granted, the band doesn't utilize the typical cathartic triggers of rock or electronic artists. Neither do they give in to apocalyptic crescendos or the typical nostalgic bent of most ambient music. The band's neutrality is calming; their restraint adds a strange kind of mystery to tracks like "Bahnhof Zoo" where ringing guitars and muddy percussion hint at a climax only to fade out and be replaced by slow, trance-y synths that take the track into something more restrained but equally suggestive. If M83 are all long grass and big fluffy clouds, Port-Royal are more nocturnal, shadowy, and allusive. The band's studious minimal drones make the unintelligible vocal sounds that hover at the beginning of "German Bigflies" all the more effective.

These sinews are where the band really shines, where the guitars and synths are so in sync that they often seem like faint impressions of each other, making it hard to tell where the sounds originate. These reverberations are what keep the rather rudimentary beats from being too tedious or distracting. It's the same immersive strategy that made the Field's From Here We Go Sublime so appealing, where rhythm is almost entirely subordinated to the drifting layers overtop; an empty canvas on which the band paints impressionistic sound scapes. These tracks, of course, are much slower, the Field's dance floor beats replaced by crunchy IDM percussion. Although, occasionally, the rhythm does add something: on the first part of "Leitmotiv/Glasnost" the synth line runs in a propulsive counter-rhythm to the drum machines.

If Afraid to Dance favours technique and production over the development of actual songs it nevertheless finds the band far enough ahead of most post-rock that they actually point towards new directions for the genre. I still feel as if there are two sides of this band fighting for precedence; one trying for a more updated version of ambient house, and one steering towards something more abstract and drone-based. The fact that the band incorporates both into their style keeps the music from being either too lulling or too rote and mechanical, giving the listener something that's warm, elegant, and mysterious all at once.