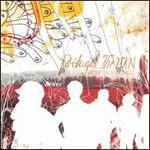 Portugal. The Man: Waiter: "You Vultures!" 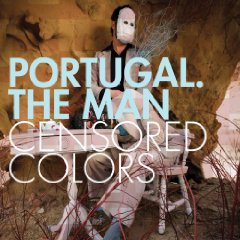 “I was born in 1989,” John Gourley sings in falsetto toward the end of The Twenty-Five, a miniature suite which comprises the second half of Censored Colors. Gourley employs a lot of gifts as the driving force behind Portugal. The Man: inspired guitar playing, manic visual art, counterintuitive songwriting grounded by a strong knowledge of pop history. But it’s his voice that’s his best instrument: an aching, natural metzo-alto that floats, like a cloud, over uneasy instrumental arrangements. It also sugarcoats some truly obscure lyricism. “All we could do,” he sighs at stanza’s end, though one never learns if he is either lamenting the fact of his character’s birth or giving some sort of stoic apology—he never finishes the thought. “1989” is allegedly about the first Persian Gulf War, and good luck to anyone who can find the literal connection. But the music is so elegiac and beautiful—like the Beatles’ “A Day in the Life” closing out Kid A (2000) rather than Sgt. Pepper (1967)—that, coupled with Gourley’s voice, one believes the song to be a child wailing in the darkness, an infant’s record of at least some sort of intuited violence.

But only puzzles await anyone attempting to ascertain any kind of narrative out of all this. Exhibit A: Planet of the Apes style masks line the album’s artwork; earlier limited editions came packaged with one. Exhibit B: the modal chorale “All Mine” (a Brian Wilson pastiche, but no less haunting because of it) makes reference to animals “let out of our cages.” Exhibit C: “1989” says something about moon children and a people’s son before announcing, repeatedly, that “It was patience that we had, and the miles that we had left that held us there until we could let go.” Conclusions: simian space travel? 12 Monkeys as Genesis always intended? Owen Wilson as Eli Cash presupposing that Dr. Zaius somehow invented Skynet? Who’s to say?

It’s as hard to get a bead on Portugal. The Man’s music as their lyrics, but the former is far more fun. One hears chiming, straight-four piano chords cribbed from Motown and Beach Boys albums next to muscular post-hardcore—At the Drive-in is an obvious influence, the period in the band’s name gives it away—and juicy riffola piped in from the seventies (or early nineties, same diff). As well as, you know, Radiohead. But like My Morning Jacket, PTM is forging a longer, broader view of classic rock that may, in fact, only work for them, and only because of the vocal prowess of their singers. But Jim James found his songwriting feet early, on Tennessee Fire (1999), then expanded the band’s sound. PTM seem to have arrived at the same point backwards. While Amir luffed Waiter: “You Vultures” (2006), this writer was more nonplussed, less impressed by the band’s admirable Mr. Potatohead-style arrangements than concerned by how closely the resulting mania sounded like the Mars Volta. But that same surging restlessness now buffets a full compliment of great songs, and it’s thrilling to experience.

One notes that The Twenty-Five kicks off with “New Orleans,” a city that drowned when Gourley, really born in 1980, was the titular age. Even if evidence on wax is scant, a political awareness seems to animate the band at least internally, and certainly amongst childhood friends Gourley and bassist Zachary Carouthers, both from Wasilla, Alaska. But the internal became external in the bizarre election cycle of 2008 when Wasilla’s mediagenic and brutish former mayor held the media’s attention. People asked the band their thoughts, and they answered: Carouthers gave a bloodless account of his attempts to build a skate park over and around Sarah Palin’s earmarks, while Gourley wrote an impassioned, personal recollection of his father refusing to shoot a moose because the family “d[idn’t] need it.” One could almost hear the scoffs from the airplane of the noted aerial hunting enthusiast governor, but no one could ask for a better depiction of the dichotomy of the actual frontier—a place governed by necessity, communion, and logic, where idiosyncrasy flourishes—and its farcical simian mask worn by Palin, for whom “rugged individualism” is a front for conquest, manipulation, and sport.

“Censors censor; Colors color”—so the band enigmatically explained their album’s title, but when they found themselves in a tiny way sucked into the vortex of the election, it made sense. Colors are eternal, elemental; censors are human, mortal. Mankind’s destructive tendency—so perfectly represented by Alaska’s governor, agitating for ANWAR drilling while shooting animals from the safety of her plane—is as much an existential cry against the certainty of death as the creative one is. The destruction is more terrifying for it, as it is a reaction against land, color, oxygen, things which do persist after our demise. We attempt to prove our own permanence by disproving theirs, even if it hastens our own demise. “I matter!” the bulldozer engine cries, as fierce as any of the music found on Censored Colors. None of this is to say that the album stands in its way. It is not really change we can believe in but a roaring, grand statement over the corpses of so many murdered moose—a defiant, nonsensical shout back: “no, you don’t.”