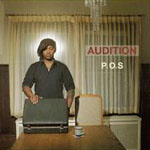 Man. P.O.S. has that shit, you know? Like, that Rock, that smack, and he pushes that shit, you know? He steps right up to you like you’re supposed to know who he is, and you’re gonna buy his shit, because you’re supposed to already know his dope: “First of all / PUSH / That’s all / that’s the end of it / second / give it up to RSE for hooking up a kid / I got the two best: the newest and the truest / Doomtree and Rhymesayers Entertainment / you know the name.” Like, P.O.S. is hooked up, and he got that hook-up, you know? He got what you want. But you don’t know it yet, and that’s your fault. He got people like rapper Sims (I’ll rap to you about Sims next week, don’t sweat that), and Lazrbeak on beats, so he got his dope-dealin ground soldiers, his crew, right? But he also got his network -- and that’s Rhymesayers, and they got a rep for that good shit, right? Like, it’s like Brother Ali had a lil bookish nerd cousin, also taught by Momma Ali to bite peoples’ heads off, grind them up in they teeth, spit it back out to the fiends: “So, so ridiculous / funny / so f!cking sick of this / consistent lack of vision / from children saying they listening.”

And it’s that good shit, too. Make you hype, clear your mind, you see things like it is, get loud, feel strong. And the high lasts about 45 minutes or so, but it’s a ride that whole time. Like, it starts out sort of mellow, but you get into “Half cocked concept” and you get this low-end rumbling feeling, stretched out bassline in the back of your brain, and you itch a little bit, but it’s cool right? Because it’s like that itch you get when you listen to too much gnashy punk and you’re juiced in the first place, you know that feeling from Check Your Head’s dirtier bits, right? It’s a kink in your jaw. And Doomtree DJ Turbo Nemesis does little flares all over the place, sharpens the points, right? Makes it sting a little more, wakes you up.

And then it’s all eyeball lambada like “Stand Up” with little Lazrbeak horn stabs over huge Lazrbeak horn stabs and a sweaty hymnal chorus and drums that make a rollercoaster in your head. And you want to push people, jump over fences, catch bullets with your sinuses. And P.O.S.’ flow gets synovial. And he says the most compact powder-burst eyelid fireworks oners like “I’m patriotic like a fox.” And there’s actually more scratches in the breakdown over another punky guitar solo that actually fits because, you know, punk used to be hip hop. Back in the day, before shit got diluted, before the baking soda. So this is that pure crack, in spirit, and it perks like I’m right about it, you know?

And then about halfway through the trip things get a little extra-sensitive, you get a little cut open, synapses flaring hard. So you get spooked easy on “Paul Kersey to Jack Kimball,” paranoid organs, the sound of smoke bubbles, and Tokyo gangland chimes, can’t feel your toes, hopefully you’re just gone a little cold. And I know some kids who thought Dipset’s word repetition was on some political, language-abuse shit, like deconstructionism and shit, like Derrida or whatever. But P.O.S. says “we don’t throw our hands up like we don’t care any more / we throw our hands up like we don’t care any more.” Which is a little bit of downer, might disturb the high if you let it, but it’s cool to see words bending over themselves like that, and not, like, just for a hit, you know? It’s like saying something when you’re saying something. It’s like he’s taking what he wants from it, he gets his laughs, his respect, but then flips it, reinvests it, gives the customer something to go away with, too. You give it up, but you get something back.

And then right before you come down he hits you with that intense, concentrated headsqueeze straight from the ’70s, like Adam West-as-Dolemite is powing you in the skull, like more zooted horns, more of those Lazrbeak drums that quake your guts, and right when you’re ready to jump through police car windshields the entire beat molasses-out, the spin slows down, but P.O.S. sticks you with a double-time flow and you may as well stand on your head til you pass out. You need a rest, like an emotional break from the emotional rush, it’s the “Teddy Bear and a Tazer” effect, and this is the only stuff you can get it from, right here, and it’s probably gonna be the reason people start coming to this dude from miles around, Pied Piper, and some communities are gonna feel the effects of this, like, clientele is gonna be switching sides, things will get a little shaken up, quote that.

I dunno, man. Like, after last year, and I can only speak for myself, right? But after last year I’m pretty sick of that same old crack from the same old hustle, the rush got dulled after a while, just getting straight coke from these guys, and that’s it. Maybe a little girl talk, but otherwise it’s the same old high, right? Are these dudes really going for theirs or just, you know, redressing the package over and over again? I’ve had to ask that, to face up to it. You gotta have wit to deal it, you gotta have the mind to hustle, right, you have to be smart, but sometimes when the market gets diluted you gotta go back and see where it all came from, so you can get into the lab and cook up something new, instead of peddling that same old product. Something to wake up the nerves that got deaded from the constant pummeling, right? Something that resensitizes.

It’s time for that. The signs are all around, you know? I mean, computer geeks is talking like dealers on the internet, you know?