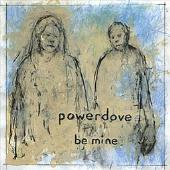 There are at least four people who’ve signed their name to Powerdove. And so help me, for the duration of Be Mine, I cannot figure out why it takes even half of them—unless they’re each a specialist in their particular windchime of choice. At first glance, the name Powerdove (a moniker initially ascribed to solo projects by Annie Lewandowski) had me expecting some lush, sonorous creature batting lightly around in the upper reaches of the aesthetic atmosphere, one wing dipping into shoegaze; gliding, coming and going in flutters and energized folk-pop ballads with some quirky details from collaborator, Alex Vittum, whose name keeps popping up in relation to odd slews of percussion. Seeing the likes of Deerhunter and Xiu Xiu included in Lewandowski’s list of collaborators only reaffirmed my expectations.

However, even more spare than their chalk-and-charcoal, eraser-marked William Kentridge-looking album art would imply, there are exceptionally few elements comprising Be Mine—at times, exquisitely few. It is an album full of unnervingly patient, pared-down tracks, completely bare of distortion, flourish, and climax. Minimal and sincere, they leave out those contrasting elements that often prime my stomach for the task of digesting the sweet, the hopeful, and the intimate. Powerdove makes no such attempt to deviate from face-value adorations or cloud its more preciously held moments. There’s no sentimental diversions, just as there’re no ornamental diversions from Lewandowski herself. The meat of the accompaniment rests in innumerable knick-knacks and wind-chime-y doo-dads to churn out enchanting sounds in the background. Besides the occasional upright bass, there are few traditional instruments filling in the songs, and when instruments are used they are rarely used traditionally.

The strings, for example: they don’t soar like I expect strings to. Here they come often in far-spaced measure, in meager doses, are barely struck or are applied one single-string pluck at a time. In between clinks, chimes, and percussive novelties, Lewandowski’s drowsy-paced voice solely bears the weight of the songs’ interest. While they can feel at times like unnecessary stage props, carefully doled out, colorful attributes fill Be Mine that, if anything, serve as literal accounts of the songs’ lyrics. Taking a turn for the blues-y in the macabre murder narrative “Resting Place,” the lyrics, for example, are accompanied by some literal shuffling clanks of a chain gang, a nodding upright bass, and breathy piffs and of experimental flute-work.

Similarly, with an off-kilter and slightly off-key appeal in “Spinnin’ Daisy,” the song literally turns, the rusty cries of a tetanus-threatening merry-go-round resonant with the playgrounds of my yesteryear. Lewandowski’s voice takes a charming turn itself for the more retrospective, child-like. It’s an innocent tone she returns to again with a small (and much-craved) skip in “No Carpet.” One of the few songs with a brisker pace and established momentum, it’s maybe too nostalgic and too offputting in its playful pots-and-pans tinkering. Like when someone you’re dating shows you their stuffed animals.

From the sweetness of Lewandowski’s tone across the board, to the occasionally trite lyrics like “honey kisses on honey lips” on “I Don’t Mind,” to the constant use of chime-elements (which I’m just as used to hearing more sparingly paired with distortion and wailing guitars these days) Be Mine often feels…precious and bottled. And while that can be a detracting feature, it also lends a stylistic benefit you won’t find in many other albums right now. It’s small and preserved, emotional but safe, and remarkably clean. Without so much as a speck of distortion, each lyric is clear and its moments of improvisational grace come easy and unfettered. And that isn’t invaluable.

While it labors to expel so much as a single moment of levitation or even momentum, when Be Mine takes off it’s pretty nice. It’s an album that spends a whole lot of time dicking around on the runway, makes a few hops in the air, then rolls slowly back to the gate. Like: full of very good intentions, getting ready to leave the apartment but just never making it out the door. Like: getting in your car and sitting in the driveway with the engine warming up before taking out the keys and going back inside. And that’s fine, as long as you’re not in the mood to go anywhere.