1. Prairie Train
2. Upset Frankie Hustle
3. Gallant Foot
4. Past It Pastures
5. Snowshoes
6. Ant and the Pea
7. Red Norvo
8. Get All the Ribbons and Bring Them Here
9. Purple Mint 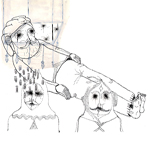 Vancouver is a chill city. I'm from Ottawa, a government town, well-meaning but predictably stuffy with its "well-I-never"s and gothic architecture. Vancouver's a city that radiates relaxation and mellowness. Maybe it's something intrinsically West Coast, a vibe that permeates and insulates its residents from life's harsher barbs. Maybe it's all the pot. In any case Vancouver band Precious Fathers (on Vancouver label White Whale) are certainly of that town. Their bio shrugs in response to the question of what type of music they play, answering, "rock music without vocals." I might have added, "that doesn't try to rock," but close enough. It's refreshing, not having to read a bio that characterizes some nice, faithfully genre-specific music as "post-everything" or as something which "reminds you why music is important." Precious Fathers' rumpus room instrumental rock is pretty humble and humbly pretty; the lack of lyrics' ugly imposition extends beyond this album to the band's necessary promotional material. There's nothing to say, really. The album speaks for itself, so just relax.

The delay, the keyboard horns, the semi-distorted guitar picking, decidedly un-post-rock groove-based drumming, and the warmth of these production values, especially on opener "Prairie Train," evoke Broken Social Scene's "Pacific Theme" or a simplified Do May Say Think (though few moments here quite reach those bands' more sublime heights). "Prairie Train" wags and saunters, a relaxed interplay of guitar and its mimicking horn accompaniment. It's an attitude evident throughout; a kind of anti-crescendo ideal for those allergic to volume twiddling or high-maintenance records that stompingly demanding one's attention.

"Snow Shoes" builds slightly, but it's to an incandescent shimmer, favoring beauty over the urge to chug corporeal, ugly bar chords. "Gallant Foot" has double-timed high hats that mildly suggest the kind of shuffly dance one attempts while wasted. It blossoms at its midsection into radiant melody, revealing layers of complexity that paradoxically never contrive to escape the album's mellow boundaries. "Red Norvo" does the same, but allows a semblance of dirt to creep into its guitars before the song's staccato conclusion, which doubles as the album's crescendo. Exciting, to be sure, but these moments of energy are intentionally rare -- rigidly controlled departures more effective for their scarcity on an album that hums pleasantly along with nice-guy reliability.

The album's truncated scope could have made it a dull listen, but at nine tracks it's an efficient little record, comfortable and modest. The kind of record that you throw on when you don't know what else to listen to, or don't want to bother with cumbersome mission statements and messages, only to eventually realize that this listening has become a daily routine. I've found myself thinking that Precious Fathers is an album near perfect to background almost any situation, alone or accompanied. It isn't about big, messy upsurges. It's about being pretty, about looking north to see a mountain range looming so epically over a city that it can't help but put the small stuff into perspective.