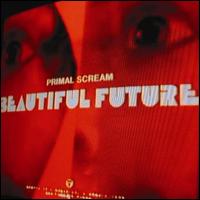 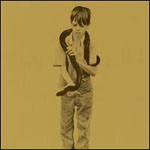 Unquestionably, the coolest item of rock n'roll swag that I own is a bright red t-shirt with the mysterious phrase "SBVRT NRMLTY" emblazoned in black letters on the front. I've probably gotten more "whoa, killer shirt, dude" comments from the man on the street with that piece of clothing than any other in my collection because those in the know realize it's a reference to "Kill All Hippies," the lead off track to Primal Scream's furious 2000 release XTRMNTR, a record that I've always believed would have likely been afforded AOTY status had Kid A not been released a few months later.

Less an "album" than a showcase for a cadre of hip producers (e.g. Kevin Shields, the DFA, Jagz Kooner, Dan the Automator) carrying the "Primal Scream" label, XTRMNTR was an angry mother of a record. Completely obsessed with rhythm and piercing layers of feedback (just try to listen to Shields showcase "Accelerator" on anything other than normal volume), it led nearly every critic under the sun to cite Emma Goldman and label XTRMNTR (if not inaccurately) as "revolution you can dance to." 1997's dub intensive Vanishing Point was also a fantastic record with which to show off high powered stereo equipment to friends, and if 2002's Evil Heat felt too much like XTRMNTR leftovers, at least the Scream was still attempting to forge new ground, reeling off a fine krautrock tribute in "Autobahn 66" and convincing Robert Plant to play blues harmonica on the otherwise lame "The Lord is My Shotgun."

Ok. Now that yours truly has just walked the reader through a condensed history of the years in which Primal Scream was a quality band, mention must be made of 1994's notorious Give Out, But Don't Give Up, a collection of anemic Stones rips that still produced their best known song in "Rocks" (covered by Rod Stewart!). A disheartening follow-up to 1991's baggy dance classic Screamadelica (another producer showcase, this time Andrew Weatherall), the Primals fortunately managed to blot out most of Give Out's questionable legacy with the two awesome, and one decent, albums that followed.

Until now. Simply put, the very existence of Riot City Blues is a little confounding. Kevin Shields jumped ship for the first time since 2000, and apparently Bobby Gillespie and co. viewed this as a golden opportunity to get “back to basics” and record more Rolling Stones retreads. But why? You just can't record XTRMNTR and then revert to aping Mick and Keef six years later like the latter never happened. Primal Scream might have been better advised to change their name, or break up. It's like Johnny Greenwood completely shunning all of Radiohead's output since 1997 with the newfound revelation that Side-B of Pablo Honey is, like, the illest shit ever.

And yet Riot City Blues is unquestionably a stronger album than Give Out. In fact, if you're out at the pub with your mates and "The Last Time" facsimile "The 99th Floor" comes on the juke, you'd probably say "it rocks," and you wouldn't necessarily be wrong. Oddly, Riot City Blues actually sounds pretty great, with crisp production and all of the hand claps, juke joint piano and soulful female back up vocalists that one would rightfully expect from this sort of thing. The band can't be accused of mailing it in, either, as the playing is far more passionate than the rote slog of Give Out. "Nitty Gritty," "We're Gonna Boogie" and "When the Bomb Drops" are all nothing if not catchy and well played. But the fact remains that Riot City Blues actually contains songs entitled "Nitty Gritty" and "We're Gonna Boogie.”

It's nice that Primal Scream attacks these tunes with gusto, but the passionate performance doesn't hide the fact that this album is utterly inessential, little more than a sampler for what amounts to a really swell wedding band. It can be argued that Riot City Blues is what happens when hot producers neglect to return Bobby Gillespie's phone calls, but are you really going to tell me that Danger Mouse wasn't available? If I ever catch myself wearing a Riot City Blues tee, I'm gonna have to kick my own ass.