1. The Carpenter and the Dainty Bride
2. Pilcher’s Squad
3. Mary the Ice Cube
4. The Last Superpower AKA Rapscallion
5. My Friend Fats 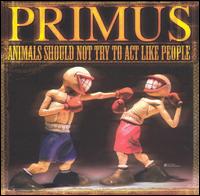 I'm willing to bet (oh, say ten to one) that you already have an idea if you are going to enjoy this EP or not. Primus is one of those groups that, according to the liner notes, "should not exist" - in other words, the defining sound of the band is too against the grain of popular music to mix well into mainstream success or translate into large sales numbers. Claypool, LaLonde, and Alexander (or Mantia, depending on the time frame) seem to have dispelled that theory.

I'm not trying to say that Primus has had a flawless career by any means. A few tracks on The Brown Album felt unnecessary, and all but a few tracks on Antipop felt unnecessary. My most sincere hope is that Antipop was a fluke, the sub-par album that seems to escape from the better bands. Seeing as Animals is the first release since Antipop, I went into it with a certain amount of nervousness. While my fears were not completely dashed, I was not as let down as I expected to be.

Animals Should Not Try To Act Like People is, as I stated earlier, an EP - a mere five songs long. This is relatively unimportant though, as the group gets their point across in these five songs. Most of the songs sound like a mixture of Seas of Cheese-era Primus and Antipop-era Primus. The weakest track, in my opinion, is "Mary the Ice Cube;" it sounds like an Antipop out-take that the band dug up for a reason I cannot comprehend.

Were Animals Should Not Try To Act Like People just a five-song EP, I would say "this EP is for Primus fanatics and bass-crazy folks only; everyone else save your cash". But since the purchase of Animals also includes a DVD with all the band's videos, some live performances, behind-the-scenes work, and other goodies, I'll recommend the purchase for the DVD, since many of the band's videos are quite hilarious. The score listed is for the music only, not the DVD.