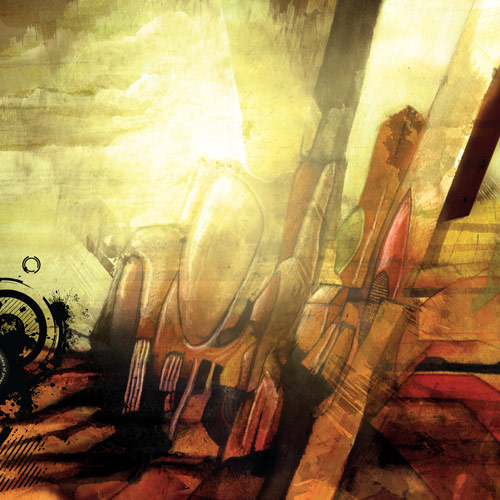 On the We Are The Music Makers forum, there are posters who’ve nicknamed Richard Bailey “tightrope.” Why? Because, as even a casual glitch listener will tell you, he’s an act that can sell a fuckload of candyfloss and perform without putting a foot wrong. Well, maybe once: if you asked fans which Proem CD they’d sacrifice to preserve hostages, they’d almost certainly nominate Till There’s No Breath, Bailey’s 2009 voyage into drone which deviated from his much-loved formula (cold crystal tones attacked with shards of percussion). So when host label n5MD announced the follow-up to Breath would be “an album for die-hards and new-comers alike, mixing catchier melodic passages with some of his roughest beatwork since his debut album,” fans were left pondering the inevitable: would Enough Conflict be Proem’s white flag comeback, the sound of man with his tail between his legs? The short answer, to anyone knows their flag signal dictionary, is no. Enough Conflict is actually Proem’s flag-with-two-Ls-and-an-arrow record, meaning: “All is well. Am moving on this way.”

I say this because the dark ambient detour Bailey took on Breath is something he’s in no hurry to airbrush. After all, he spent a long time perfecting his own style of drone, inspired both by fatherhood and days playing Splinter Cell: Chaos Theory. The ghosts of Breath hover over Conflict like halitosis sniffed at a dinner party, with the first frosted notes of “Deep Sleeping Birds” joking that Proem’s still in his ice hole. But then some familiar scrapes and clicking come to life and you realise that Bailey’s now found his heel hooks, and is heaving himself back to the light—a grey light, anyway, as his opening track’s fusion of steam and scratches is hardly a neon resurrection. It’s not until the headband electro of “Back to Fail” that it’s clear Proem’s back to his bodacious ways, flashing happy laser beams between brutal drum patches. Despite the variety promised on the press sheet, the approach on Conflict soon stabilises, comfortably defined as the sound of refineries solidifying into electronica.

In fact, the mixing n5MD sold us with doesn’t take place till later, when Proem experiments with physical instruments and slides some of his programs around them. Maybe he’s a little disheartened with technology following the malicious wiping of his website, but if he wanted to throw his fans another curveball, it’s at Conflict‘s midpoint that he does it: seven tracks in, it becomes apparent that the album’s a smokescreen for a two-song chakra EP, beginning with the bliss vibes of “Kalimba Jam.” A xylophone loop so calm it could be selling you health insurance gently sits upright, the little computer beats as infectious as breath and pointing to Bailey’s new muse. This steady dripping continues on the title track, which inherits its predecessor’s xylophone loop and cradles it with faint waves of guitar. It’s only until the reverberating woodblock of “Skulls” that you know Proem’s been jerking your chain, bringing back a party trick of his: vocals, ones which have to fight so hard against the piano pattern and drum stabs they change to another language.

The truth is, once you’ve treated it to a couple of listens (I can’t think of a single Proem product that can comfortably be swallowed in one go—even his artwork requires two pairs of glasses), it’s clear that the n5MD headquarters wasn’t lying—this really is Richard Bailey’s most experimental album to date. Surprisingly, it’s also his likely second best, not quite eclipsing the highs of Socially Inept (2004) but certainly knocking heads with his EPs.

Bailey’s secret ingredient has long been his grasp of discipline—he shuns the IDM’s indulgent runtimes for crisper, more lean compositions—and by giving Conflict thirteen tracks there’s a lot he can pack into the mix, from the frantic central heating and brilliant tones of “She Never Cries” through to the molecules of “@ The Firey Abyss,” which’ll leave you feeling lost in space without the Matt Le Blanc backup. Bailey even squeezes in a hidden track, one where the beats don’t burst like fireworks but merrily mimic circuitry—dead circuitry. Other jumbled masterpieces as restless as this could easily be the work of a first-timer, but Bailey’s been producing for eleven years plus and has never once let go of his angst, either crunching it into techno to the adoration of his fans or blurring it into drones that get him pelted. Perhaps this is why he’s outlived so many of his imitators who threw in the towel and became web engineers; if you want to stay in the game you need trauma, deep and daily. Proem knows that better than most, especially now his website’s been hacked. Stand by for a reaction that sees him morph once again: maybe an album written in HTML code.