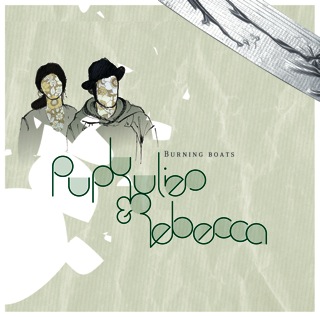 Trade secret: overly biographical onesheets tend to preface lukewarm rewards from the actual music they describes. However, I’m still not sure if I’ve decided if Janosch Blaul (PupKulies) and Rebecca Hannah Gropp have a conceptual/circumstantial idea that is better than their music. Let me describe it like a PR rep: Blaul was a hip hop producer who moved to Germany to study, which started a love affair with European electronic music. Gropp was a jazz singer who also had roots in hip hop. Their present music is a blend of chanson and minimal dance which actively attempts to combine various styles of traditional songwriting with techno. Okay: fair enough. But the reality is that, aside from the way Gropp’s voice fluctuates between Françoise Hardy and Beth Gibbons depending on the mood of the track, the music of the duo mostly sounds like the stuff on Róisín Murphy’s Ruby Blue (2005) without Murphy’s penchant for overdramatics. Which is weird to say, since it’s this album that features a cover of “See Me/Feel Me” from Tommy (1969).

There are a lot of things I like about this album. “Nouvelle Chance” updates Yé-yé in an interesting way, simultaneously evoking Gall, Fontaine, and Hardy without really sounding like any of them. “Hold It Tight” works wonderfully, its vocal sung over a gorgeous bass patch arpeggiating in the center while subtle percussion rolls in the panned channels. “Idiot” sounds like somebody updating Carol King to mesh with modern music, or at least hints at that general ballpark. “Ton Chaffeur” hints at any number of recently popular dance acts like the Field, Booka Shade, and Pantha Du Prince. Also: really great track.

But the “but” is kind of that there’s no big “but” here. There’s nothing egregiously wrong with the tracks I haven’t mentioned or anything; there’s just a general sense I get from this album that it could be better, or there could be a better thread, or something. Taken on their own, most of these tracks are pretty engaging (although I don’t know if any of them are amazing); the problem is that taken together they sort of highlight how similarly they were put together—even though these tracks cover a lot of ground stylistically. What that means in practice is that all of those musical cues listed in the onesheet play out exactly as you might expect, because this duo isn’t doing any blending; they’re just playing them as they are. I think they do a pretty good job of melding different styles of composition with minimal techno, but the most obviously non-minimal tracks—“Black and Blue,” “Nouvelle Chance,” and “Paper”—have far fewer electronic accoutrements. Dear onesheet: it’s easy to say the acoustic instruments mesh perfectly with the electronics when the violin on “Paper” just has a few stray percussive noises to accommodate.

So then the other question: if Burning Boats isn’t as revolutionary in terms of production as it suggests itself to be, is the songwriting enough to hold it together? Sort of, but while I like many of these tracks, many of them are underdeveloped, or at least hamstrung by the attempts of the duo to achieve the type of synergy that I’ve already dismissed. “From the Top” has a bunch of neat ideas, but the weird post-New Wave ’80s pop thing it has is more annoying than anything else. “Black and Blue” hints at Kate & Anne McGarrigle, but the vague sheen of electronics doesn’t really add anything, and the song itself could be far looser. This album has good moments, then, but what it really does is show how singular and impressive Ruby Blue was for the way it made dance music out of traditional songwriting, rather than trying to combine the two. Is it unfair to compare this album so directly to that one? Perhaps, but just listen to “Hold It Tight.” I just wish the really good moments like this and “Ton Chaffeur” were more numerous.