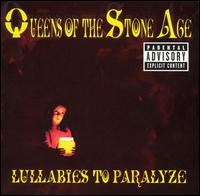 Queens of the Stone Age: Lullabies To Paralyze 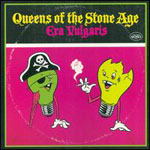 Irrespective of what you think of the man’s music, Josh Homme is pretty hard to dislike. What’s not to dig about a sarcastic goofball prone to giving hilariously long-winded interviews to the blogerati while pausing his live shows to call out a recalcitrant audience member as a total “cocksmoker,” as he so famously did on his band’s 2005 Live DVD Over the Years and Through the Woods? He labels his elaborate guitar pedal rig the “Joshuatron 5000.” The man is funny. Then there’s his unwillingness to compromise his artistic vision, piloting Queens of the Stone Age through five albums and seemingly infinite line-up alterations, all in the name of producing some of the most consistently satisfying rock music of the past decade. He’s arguably my favorite working musician today.

But Homme came off as a bit of a controlling bully in 2004 with the all-too-public sacking of founding bass player Nick Oliveri, a move over which Homme essentially claimed full responsibility and for reasons still not entirely known to those outside of the Queens’ inner circle. 2005’s Lullabies to Paralyze was Homme’s first foray into post-Oliveri Queens, and yours truly initially pegged it as a good record which nevertheless suffered from the lack of Oliveri’s shrieking acting as foil to Homme’s more traditional songwriting. It was also too long. Two years later, I’d probably take most of that back. Lullabies has slowly grown into my favorite QOTSA release, largely on the strength of its unassailable mid-album run of “In My Head,” “Little Sister,” “I Never Came,” and “Someone’s in the Wolf,” arguably the finest twenty-minute rock block of Homme’s career.

Regardless, Lullabies was surprisingly glum for a Queens of the Stone Age record, with much of Homme’s sense of humor and cocksure attitude sacrificed in favor of a defensive posture and scathing putdowns more mean-spirited than funny (“Broken Box” indeed). Any demons that may have contributed to Lullabies‘ bummed-out mood appear to have been vanquished on Era Vulgaris, a hearty guffaw of a rock record with both middle fingers raised and Marshall stacks set to liquefy. Joshua Homme’s snarkiness has been restored to the forefront and his new album bubbles over with the confident riffage that his fanbase craves.

“You’ve got a question / Please don’t ask it / It puts the lotion in the basket” – sarcastic nonchalance and a Silence of the Lambs reference? Homme’s cup o’ smug already runneth over, and that’s just the first fifteen seconds on the first song. Then there’s the music itself, a grinding, metallic stomp entitled “Turnin’ on the Screw” which immediately oozes the cockiness largely absent from Lullabies. Follow-up track and first North American single (the U.K. inexplicably gets the stronger “3’s and 7’s”) “Sick, Sick, Sick” is all 1970s muscle-car groove, riding an inflated punk riff over desert blacktop with Homme promising “a lick on your lips and a grip on your hips.” The song is nearly derailed by Julian Casablancas’s unintelligible moaning over its second half (seriously, WTF?), but the impact is felt.

The remainder of Era Vulgaris proceeds in similar fashion, providing refreshingly straightforward rock anthems with a heavy emphasis on Joey Castillo’s pounding. Mid-album highlights “Misfit Love” and “Battery Acid” in particular rely on vicious, lock-step clanking akin to throwing a trash can down a flight of stairs, or akin to a Mustang assembly line, leading one to believe that backing vocals on a non-album track wasn’t the only thing Josh Homme took away from letting Trent Reznor hang around the studio. But being that QOTSA has always been about the ladies, the ferocious push of “Battery Acid” is immediately tempered by “Make it Wit Chu,” a lounge lizard piss take in which Homme makes his intentions perfectly clear (the live version from Over the Years is particularly lecherous).

Elsewhere, Homme doesn’t think twice about marrying a textbook Nirvana-riff to squealing brakes-wah licks because he simply knows it’s going to sound completely awesome (U.K. first single “3’s and 7’s”), and on “Into the Hollow” and the trio which closes out the album, he indulges in his penchant for ooky-spooky psych-rock akin to past Queens epics like “I Think I Lost My Headache” and “Song for the Deaf,” with only the aimless “River in the Road” failing to leave an impression. Era Vulgaris also benefits from being over in a comparatively compact eleven songs and forty-seven minutes, devoid of the extraneous two or three filler cuts that have deflated past QOTSA outings.

The mid-June release date isn’t coincidental; Josh Homme wants Era Vulgaris to be your summer bonfire record. And with a restored aura of cockiness and predictably massive arsenal of riffage, he’s once again fulfilled his goal, which is less than surprising. The man is good at what he does.