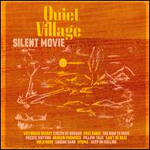 So, there’s the “I mean, I like the guy, but he’s kind of a drag”-guy. You know him. Familiarity with “the guy” is sort of unavoidable; he’s your coworker or classmate or some good friend of your sister; descriptions of him often boil down to a mention of his politeness and pleasant manner, a smattering of superficial adjectives and a knowing nod rather than any discussion of personality or warmth because he’s just… he uses Quiet Village’s Silent Movie as a party soundtrack over Since I Left You (2000). OK? Upon consideration, it’s a tad depressing to talk about someone as if they were a nice suit; to never wonder what they do with their spare time or what excites them. Then one day, you receive an invitation to an apartment-warming party he’s holding. A strange curiosity and a reminder of your blanket anecdote compel you to RSVP.

A party soundtracked by Quiet Village’s debut is essentially a party at which the Avalanches are blaring but without the sexy people and exotic locale, and, as I mentioned, your host for the evening isn’t some ingratiating, charismatic socialite. The guests aren’t consumed by orgasmic joy, partaking in some pseudo-orgy in the living room, so much as they’re scanning the room for conversations that look more interesting than the ones they’re having. It’s more subdued concourse than joyous gathering. Oh, and everyone agrees: the music playing in the background is “pretty good” and “vaguely familiar.”

The schmaltzy sleepiness of Silent Movie does instantly transport one into a ’60s melodrama, though, upon examination, it seems impossible that it wouldn’t, as the source material for many of the songs—almost all of which are culled from that era—on Matt Edwards and Joel Martin’s debut offering are not so much altered as tinkered with, augmented with slight drums or warped vocals. It would seem in their attempt to create an atmospheric journey comprised of bits and pieces from sappy ballads that they’ve created something that resembles an expertly compiled mixtape, smudged with the fingerprints of artists like Andreas Vollenweide more than those of their own. The differences between “Pacific Theme” and Ryuichi Sakamoto’s cover of “You’re A Friend To Me” are negligible, and though Quiet Village’s use of other samples aren’t quite as blatant, the album is an exercise in thoroughly blurring the line between sampling and lifting a song in its entirety. While potentially off-putting and a bit obvious in its academic conceit, this technique of leaving its samples largely untouched is successful in the sense that the tracks Quiet Village selects effectively capture the dreamy, almost surreal, air they wish to convey through the album’s deliberate pace and ambient leanings.

Gripes and condescension aside, Silent Movie feels like an accomplishment. “Circus Of Horror” laces dirty funk with ghostly, water-logged strings in a way that incites both dancing and closer listening, and though “Horror”’s deft blending of genres that would otherwise seem to clash is never replicated, the remainder of the album displays Quiet Village’s penchant for crafting quietly seductive lullabies that don’t seem like an assault so much as an absorption into the syrupy, surreal environment they’ve created. “Can’t Be Beat” plods along, measured strings alternating with more frantic ones over dashes of color provided by slight electronic accents; deep, manipulated vocals saturate the track for brief periods of time. It’s a malaise, really, only occasionally pulling the listener in with a distant piano stab or sudden stutter, but it’s an undeniably pleasing daze, densely layered without sounding overstuffed.

So, upon ambling home and flicking on the light in your atrociously disheveled apartment, still buzzing a bit, you contemplate the night’s events. Despite those blocks of nondescript conversation, you had an okay time, managing to get a smile out of your cute coworker and you snagged some tickets for next week’s Sox game and y’know, that album playing in the background, the one you caught an earful of while you were staring despondently at the coffee table for a couple minutes: that thing was pretty good.