1. Magic Friday
2. Raspberry Cream Dream
3. Kissed Your Galaxy Goodbye
4. Like Water
5. Summer Shower
6. There Has To Be More
7. Keep Your Friends Close
8. Pearly Sister
9. You Make Me Better
10. Rise Your Mountain
11. Miracle Of Triumphant 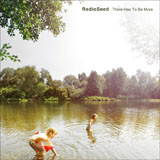 There Has To Be More

It’s not often you get to champion a man with an umlaut, so here goes: Peter Wikström is back! The crunchier half of shoegaze duo Ecovillage has gone for all-out crunches on his debut as RadioSeed, and takes things in a slightly sweatier direction—despite being bathed in the same sparkling fog he cooked up with Emil Holmström, this is closer in heart to ambient house, skipping across uneven superclubs. To guide him, Wikström retains a firm grip on the selling point of his mother band (mix boy band vocals, shoegaze and squares of LSD until you cough up rainbow blotting paper), and still sounds as though he’s the kid in the forest who’s been nibbling the wrong kind of mushroom. The difference is here other kids have joined him, and some have brought decks and a portable generator, and a big pot of salted pitepalt dumplings in case his feet get tired from raving. The result is a beatific eleven track voyage that operates without a compass, and one which sounds like the original healthy headfuck of the summer—seriously, the only way this record could feel more wholesome is if a troop of scouts sold it to you, eager to raise money for their cake sale and camping weekend.

The summery rush of Ecovillage might give There Has To Be More grid references, but Wikström struggles like Houdini against them, breaking out quickly from the birdsong and sitar splashes. “Raspberry Cream Dream” rips through his trademark swirls and pulls them onto the dance floor with gusto, with Wikström’s voice and a 4/4 house signature both clearly decipherable in the wobbliness. His vocal palette still sonds like a boy band raised on psychotropics, but comes across husky and confidently wiser, standing shoulder to shoulder with the beats. It’s the album’s first big surprise and it’s the first of several more: on “Rise Your Mountain,” RadioSeed sound practically radio ready, a guest female singer and baggy beat turning their backwards glitter into a pop song. “Like Water” is a similarly unlikely success, bending dolphin vibes around a hip-hop section that fades down into a boat drone. Think back to summer 2008 when In Ghost Colours first hit. Now imagine it powered by lemon batteries you’ve somehow remembered from science lessons. That’s the RadioSeed angle summed up.

What keeps you coming back to the RadioSeed angle is its funneled but frenetic enthusiasm. Despite the obvious hippy theme, THTBM is a groover as much as it is a roller-upper and inhaler, making it seriously easy to fall for: it’s bursting with every audio primer that drew you to the radio in the first place. The ambient lusciousness of the title track, made even more luscious when that sick dance beat kicks in, is Wikström’s snow-capped peak—picture Burial being airlifted to a South Pacific island, his gloom forgotten in banks of white cloud. He’d report back with something like this; a mix of soaring bass textures and distictive chipmunk vocals, the smog washed off in the journey (and, ironically enough, probably bound for Wilströms’ hometown of Västerbottens län, Sweden). Wikström repeatedly pulls tricks like these from the bag, particularly when really pushing it out on the likes of “Kissed Your Galaxy Goodbye,” whose starry funk could be a blaxploitation film shot from beyond Pluto. The sun-kissed nineties breaks he structures his trips around are so joyously rendered they’re our best hope of time travel to date, and as he stacks up the lockdowns of the penultimate tracks you’re already pegging out favourites. Even the overblown finale, “Miracle of Triumphant,” turns a munched guitar line into an epic sea swim, though it could perhaps benefit from a tighter structure and a few cups of hot strong coffee.

By then, however, it’s obvious that this is precisely where Wikström keeps his mojo: despite being his closest brush with the mainstream yet, RadioSeed refuses to work in straight lines, and its messy techno rhythms, Euro noises, and booming mantras are a long way from the easy way back. They are, though, a truly original sound that still know the value of mnemonics; and even though the rush is sometimes so furious you get dizzy trying to untangle it, Wilströms paddles hard to keep you afloat, like a DJ in a Keppler kayak. “You won’t slow me down,” he sings as he mixes ski bum beats with batches of homemade acid. Think Enigma wigging out on Swiss Bliss red stars, telling a kitchen chair he loves it very dearly.