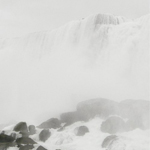 Ramesses III ruled Egypt for thirty years; Rameses III has ruled my headphones for three weeks. Thanks, Wikipedia. The nomenclature is abstruse and inexplicable and probably just as well. The pharaoh’s reign was marked by conspiracy and conflict, but this music is all snowdrift and hush, the calm center of the universe, even in its loudest moments. The disparity is fine. As with most music of its kind, we are free to read into things here what we may.

I believe in two dirty secrets of ambient music, and that is the importance of process and packaging in their overall artistic success. Basinski’s Disintegration Loops—ambient’s high point this decade, perhaps—are magnanimous and wrenching on their own, but knowing the physical process of decay that worked upon them and having the context reiterated by the New York skyline packaging makes their 2002 release all the more felt. Likewise, as a music that acknowledges and attempts to become part of the physical world (hence the name) ambient’s packaging should be appropriately well-thought; it is the music’s ambassador to the physical world it attempts to influence. These principles hold true on Rameses III’s excellent Basilica.

The release contains two short discs. Disc two (dubbed Origins) is all live performances from various venues in London. The first disc is the album proper, and is comprised of four remixes of the live performances into greater wholes. I’ll cut to the quick: the first disc—the remixes—is a sanguine and frequently astonishing affair. I might even call it beautiful and just let that word hang, unverified and woefully overused, because defining or qualifying the term in the context of a straight ambient record is moot. Sometimes ambient works, in other places it does not, and on Basilica we find scintillating sonic inspiration working all over your face. Its sounds are less haunted by melody than pregnant with them, aglow, perhaps because of the subsumed Origins they portend to remix.

Although, seriously, “remix” is a term loosely applied here. The discs contain no discernible trace of one another. If the titanic wintry waterfall of the album’s packaging is a visual symbol for the music of Basilica, all grandiloquently beautiful, think of Origins as an indoor swimming pool, tones playing softly against one another and quiet patter and home. Album standout “Rose Blood” (from Basilica) features in its sixth minute of spiraling choirs a single celestially pitched tone—when it comes it hits like an alarm clock but lingers upon that moment of awakening before more sine waves crash and recede for another ten minutes. “Origins III,” probably the most full among the Origins pieces, maintains its calm, and when it hits notes they are played lazily and as accented as feels pleasurable.

And, like I said, it’s good ambient. It works. Let it have its space among your possessions.