This Is My Big Night

1. I Can’t Survive Without My Beatbox
2. Especially If It Helps You Breathe
3. Cookie Cone Crossfire 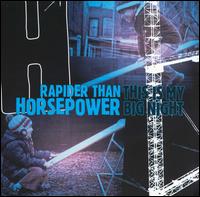 Rapider Than Horsepower just might be the new spazz-rock champions. Flesh flailing in frothing fits, they kick and squirm under their possession by demon music. Someone get a healer in the house. No, wait. Rapider Than Horsepower may be insane, but they’re still in control. Moments of calm and clarity surface from their ruckus, and everything’s barbed with grinning hooks. The band members describe their music as “what happens when creepy guys try to sound cute. The idea is to write short little ditties for all the kids.” So, basically, they’re indie-punk Teletubbies.

Mike Anderson from Racebannon, Secretly Canadian’s noise-mongers, leads a chorale of himself, his multi-tracked vocals all out of touch with each other. Waving hands wildly, the original Mikey quickly conducts the clones, some of whom try to harmonize while others stumble after, forgetting all the words. Who can blame them? Anderson sounds like he’s making up these lyrics as he goes along. “I never really was afraid or dismayed by the heat/ But that stuff do burn, now take it from me/ I was so into the magic that was movin’ our feet/ But I knew it wouldn’t last forever/ Heartbreak! Heartbreak! What you doin’ to me?”

Racebannon’s Sal joins Mike Dixon of Rep Seki obscurity for a two-pronged vibe fork of electric guitar angularity. Old drummer Josh Bonati plays on most of the songs. New drummer Rob Smith on a few. No bassist. Considering that a lot of the drumming involves cymbal smashing and that Mike’s horde of voices squeal out a ragged take on the vocal element of dEUS’ “Supermarketsong,” Rapider Than Horsepower have about as much low-end as an anorexic.

It should be unbearable, but it’s not. It’s endearing, it’s that hyperactive kid with both fists clenching a mop-head mess of sour worms. He’s a real bastard, but he’s an innocent, charming bastard, and he exercised some devious talent in infiltrating the secret sour worm stash. By concentrating their songs into lengths that only Wire would sneer at, Rapider Than Horsepower stay disciplined, focused, tight. For the most part, they manage to avoid the excess that would seem inherent to their nature.

Neither album breaks the 25 minute mark, but each is musically loaded enough to exist as a whole entity, a full-length, while also having an interesting sort of dependence on the other. Stage Fright, Stage Fright feels the most inspired and audacious; it spontaneously overflows with ideas, from the spaghetti western screamo of “Saddle Up!” to the final track’s cheerleader outro that’s far cooler than it has any right to be. The first album’s also the, um, “best” showcase for Mike Anderson’s absurd of-the-moment lyricism and additional nonsense (“He-ha-ho kittens on film/ He-ha-ho milk and gin/ He-ha-ho produce aisle and that’s all I remember…”). What This Is My Big Night lacks in comparison, though, it makes up for with a more solid sense of direction in its music and a more tangible “pop” element, evidenced by infectious songs like “Cookie Cone Crossfire” and “The Baddest I Ever Did See,” cracked power ballads and cheeky rockers that should be jumpstarting college radio playlists. The strengths of one album compensate for the weaknesses of the other, and Rapider bind the two discs by reprising a melody from the second track of the first on the second-to-last track of the second.

That reprisal is just one of a number of hushed passages where Rapider slow down, simmer down, pare down to their music’s heart that constantly beats under the askew jamming; they slacken their taxed cranks and elevate beyond the seizures of rampant percussion and geometric guitar licks. For the small city remix of Nick Drake “Pink Moon” car ads, there’s “Lick Me on the Face, It Feels Funny” from Stage Fright, Stage Fright. Over make-out music for sad art kids, Anderson sings, “We formed a bond talking about our favorite hip-hop songs/ Mine was C.L. Smooth’s ‘They Reminisce Over You’/ Yours was some mess by L.L. Cool J./ But I still dug you anyway/ Even if Cool James rocks your bells.”

This Is My Big Night lockets even more of the stuff that slow-motion pictures are made of. On “Leprechauns, Our Peaceful Leader,” the guitars and cymbals glide into a draft that ice cubes vertebrae as Anderson whispers, “Still, we keep dancing in this Indiana rain/ And no matter how far-fetched it seems/ I will keep hold of my dreams of/ Me and Diana Ross on the big screen. It’s 1963.” The end of the whole Stage Fright, Stage Fright, This Is My Big Night enterprise settles with the best moment not on that last Modest Mouse record, Greg Dixon’s hoedown violin following a guitar line worth diamonds on “Ain’t Never, Never.”

But the Rapider cats don’t confine their stark stream-of-consciousness soul to when the music’s reaching quiet; they let it course and ripple through the coked-up flashing lights and flannel colors of their songs moving at ludicrous speed. All the signature switches and noodle riffs are kinetic embellishments from a molten core that centers the two album hemispheres with gravity, and it’s that force that keeps the inclined listener coming back again and again. With Stage Fright, Stage Fright and This Is My Big Night, Rapider Than Horsepower multiply their parts for the biggest sum and create something that’s unique without a hint of pretension. Their creepy children show rock inevitably polarizes, but for those attracted, it’s irresistible.