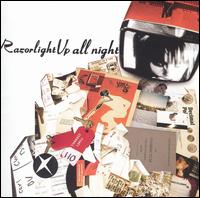 A fine line exists between contemptibility and despicability. As much as caustic zine reviews suggest some bottomless abscess of spite for pop-punk or “that MTV music,” reviewers don’t tend to really hate terrible bands. Most bands aren’t interested in active deception, or outright affront; accordingly, a reviewer would tend to regard a raging tirade against a pop-punk band as a disproportionate waste of energy. Hence: mere contempt. No one’s going to angrily crucify Jimmy Eat World, no matter how low they push emo’s common denominator, because though Jimmy Eat World roundly suck, they suck without pretension to being anything more than they are: a rote emo band.

No, hatred is not for the Sum 41’s of the world. If you want to despise a band, despise Razorlight. Razorlight is the bloke in the good suit who offers to buy you a drink and then kicks you in the nuts. Razorlight is the character who says he does charity but in fact eats babies. Razorlight is nearly everything wrong with rock and roll today.

But what really makes the blood boil is that these poseurs extraordinaires are the most narcissistic bastards this side of Oasis. Frontman Johnny Borrell‘s assertions that his band is the greatest band in the world, or that his songwriting is of unequaled genius, would be merely tolerable if Razorlight’s music wasn’t utterly bland, weak tripe. But Razorlight’s music is pure exercise in incompetent aping. Not only does Borrell directly rip off nearly everything recognizable about Television, like a poor version of the Strokes, he then proceeds to shit on it, and, convinced that his bowel movements smell like cinnamon buns, expects you treat it as newly conceived gourmet. Fuck you, indeed, Razorlight.

The band’s single strength is in their occasionally impressive drumming -- when it’s not a-splashing with overused cymbals---as it shows up on the “Leave Me Alone” with hi-hat fireworks. And that’s it. Really. Wait, drummer Christian Smith-Pancorvo is no longer a part of the group? That leaves… zero redeeming elements for Razorlight.

Speaking of lines, Borrell is miles across the divide between “sexy affectation” and “Karen O bullshit.” You can guess into which camp he’s fallen. On “Up All Night,” he tries to squeeze into Julian Casablancan’s torn jeans and sounds downright silly in his obvious aping, while his band attempts the kind of melodic guitar downstrokes that the Strokes mastered -- except in NYC the bands make hooks out of those downstrokes. The furious drumming of Pancorvo at the song’s “can-we-wrap-it-up-now?” conclusion comes off (with some overdone distortion) as a desperate ploy to convince listeners that the song has progressed from its stale riffs into an earth-shattering conclusion.

But the fact remains that these tracks (take your pick: “Which Way Is Out,” featuring another Julian imitation-yell, “Rock ‘N Roll Lies,” “Rip It Up,” “Get It and Go,” etc), fart themselves into insignificance on two-chord riffs that try to pass as hooks. What’s so sad is that for a band so obviously in love with Television and their characteristic breakdowns, the dual guitar interactions on these and other songs are combinations of oscillating chords and single note strums. Occasionally one of the band’s guitarists latches on to a simple guitar line, but reliably abandons it within seconds for single notes, or perhaps, two rotating notes.

Even the band’s execution is mostly stale. Borrell tries his damnedest to evince some belief that these songs have heart, and Pancorvo slams his skins as though he knows his (now) former band’s ship is sinking. But listening to what lies behind Borrell and Pancorvo reveals timid guitar-work and, if you listen really close, a few bland bass notes. “Dalston” is perhaps the best example of the band’s attempt to sweep its strangling lack of ideas under a rug of pounding drums and desperate Borrell-screams.

“Golden Touch,” comes off as the single above-passable song of this collection, until you realize it’s a complete rip-off of the Strokes and Television. If it sounds uncharacteristic, it’s a result of its bass and hook focus -- absent from virtually all of the rest of the album.

However, despite my sheer contempt for this band, I can’t hate them for very long -- say, past the duration of the review it takes to revile them and shoot them down. Because when all is said and done, while Razorlight can inspire intense hatred of their poseur-ism for the duration of their album, once it’s over, the plain fact is that no amount of hype can lift this garbage higher than gutter it sits in. Razorlight, to some relief, are merely destined to inspire some head-scratching at what the blokes in NME’s hype-room were thinking. Which is nothing new. D’you remember Coral Fang? Yeah, me neither.