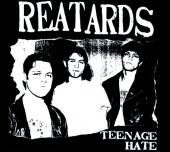 It’s always fascinating to look back at an established artist’s early work; it’s a glimpse at a younger, more naïve, less polished performer. In the case of something like Bob Dylan’s recent Witmark Demos (2010), one gets the opportunity to hear genius demystified, a kid screwing up guitar parts in his bedroom. It’s a thrill for Dylan fans, whose idol is still alive and ever-changing. But when the subject in question is someone like Jay Reatard, dead at twenty-nine from a drug overdose, such an endeavor risks reminding us what we’ve lost—all he might have been capable of. Reatard’s early recordings with the Reatards are a treat, so precocious that they fit right in with his more recent work, yet also showcase his early artistic growth. Teenage Hate / Fuck Elvis, Here’s the Reatards is a blast of youthful energy, freshness, and life. Though it’s not as fully realized as his later Matador work, this collection knocks you out with a wave of promise so vibrant it makes you forget, for a few moments, that he’s gone.

This reissue spans a whopping 39 tracks, combining the Reatards’ first cassette-only recordings, Fuck Elvis, Here’s the Reatards and The Reatards with their more fleshed-out debut, Teenage Hate. Reatard (née Jimmy Lee Lindsay, Jr.) was merely a teenager himself when he wrote and recorded this material, an astounding fact considering the seamless way he’s able to temper his aggression with melodiousness, mixing disparate genres into a stew of snarling emotion. Reatard has Presence with a capital P: bandmates Steve Albundy Reatard and Elvis Wong Reatard keep a method to the madness, but it’s Jay, screeching and sulking, playing at Jagger and Berry, that makes this awful racket into something eminently listenable.

Teenage Hate is the obvious star here, though the earlier, rougher recordings have something to offer as well. This group of furious tracks (the best of which were recut for Teenage Hate) are fuzzy and muddy but still manage to keep their hooks intact. Both versions of the catchy “You Build Me Up Just to Bust Me Back Down” are highlights, and the band gets ambitious with covers of the Beatles’ “I’m Down” and Litter’s Nuggets track “Action Woman.” Personality trumps songcraft here; both The Reatards and Fuck Elvis play like unhinged live shows, and while listening one can easily imagine Jay Reatard laying down some of his legendary stage antics. What we have here is the work of some overly excited kids, but though they’re rushing it, the chops are actually there.

On Teenage Hate, the Reatards give their songs a tiny bit of breathing space. The album barrels in with “I’m So Gone,” an instantly charming punk anthem that finds Jay Reatard already sounding more assured and intelligible. “I’m so gone / I ain’t got no home,” he sings, and it’s really a little dark if you think about it. But why would you? This is rock ’n’ roll. “When I Get Mad,” probably the best song on this collection, is where Reatard’s punkish charisma really takes shape. It’s better paced and groovier than its earlier incarnation, and Reatard tries on different voices: a faux-country drawl here, a rockabilly-inspired hiccup there. “When I Get Mad” finds Reatard, at eighteen, a rock star already, fully formed and commanding. Other standouts include the ’80s-style power-pop gem “Out of My Head, Into My Bed” and the Chuck Berry rocker “Not Your Man,” kind of an “It Ain’t Me Babe” for more aggressive times, with its dismissive chorus of “Don’ t call me / I’m not your man.”

Teenage Hate is the kind of record best heard straight through, as it’s hard to pick out and pick apart particular songs. It feels stream-of-consciousness, at times perhaps homogenous in sound but always volatile in spirit. It’s not simply punk, or simply throwback garage rock, but it’s the playful mix of these elements, along with rockabilly and power-pop, that makes a Jay Reatard album more surprising than those of his peers. The ultimate takeaway from this reissue is the pure energy and life that emanated from this young band, and from Reatard himself. One can hear a complete, at times dangerous commitment to the cult of rock ’n’ roll. We may not get to hear any more Jay Reatard albums, but what we have is so immediate, raw, and present that we forget to speculate about what might have been—what already was is rich enough to keep us going.