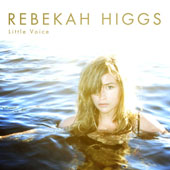 Little Voice is hardly Rebekah Higgs’ first shot at this whole “pretty indie pop” thing, though it’d be easy to come away from this EP with that impression. I don’t mean that in a negative way; just that it sounds remarkably like an artist giddily discovering herself and her voice—a voice sometimes fey-ly subdued, sometimes layered upon itself gorgeously until you surrender and no longer give a shit about lyrics like “It’s time for you to seize the day.” But also there’s how Higgs’ over half-decade long career, both solo and with her group Ruby & the Thoughtful Bees, has barely registered outside of her native Canada; tellingly, upon Little Voice’s release late last year, only Canadian publications like Chartattack and Exclaim seemed to pick up on it even existing. So, even if Little Voice didn’t sound so positively debut-ish, for someone happening upon this music through Bandcamp or whatever else, there’ll be awfully little context about the many years and releases and tours leading up to this EP and why it, though brief, reflects some serious artistic growth for Higgs.

This is perfectly fine. Not much context is needed for this EP—Higgs is from Halifax and was based there for quite a while, now lives in Toronto, and has released a couple of records before this (a solo debut in 2006, then, not long after, a debut fronting Ruby & the Thoughtful Bees), neither of which are nearly as good as Little Voice. This is perfectly fine, again, because that’s the good news: Little Voice is an assured step in the right direction for Higgs; a short step, sure, but one away from the flimsier, underdeveloped material which had in large part filled out her debut (that said: “Apples” is still a jam), and also the more visceral and better-produced but still generally OK songwriting of her Thoughtful Bees project.

Little Voice doesn’t exactly split the difference, but it does maintain all that had previously been compelling about Higgs as a singer and songwriter in fleeting doses, sharpens it, then spreads it fillerless-ly across four well-produced songs. Those four well-produced songs unfold carefully and strategically, opening doe-eyed and full of romantic wonder with the title track and “Miserably Together,” picking up and peaking with the electro-pop jitter of “Asleep All Winter,” then, with “Drunk Love,” riffing her way as close to Thoughtful Bees as this EP gets, which is still not very. They’re safe songs, really, but not overly or detrimentally so—there aren’t many surprises once each track gets going beyond a deft production touch here and there, but Higgs’ voice is consistently striking and the arrangements are vivid and playful, recalling the wintry shimmer of Beach House one moment and waltz-y folk like Jolie Holland the next. (Or even, at least in that seconds-long break that chirps out of “Asleep All Winter,” a sedated Shugo Tokumaru.)

The spacious and varied production, courtesy of Brian Deck (Modest Mouse, Califone), fits Higgs snugly—far more than the chilly and less organic feel Joydrop’s Thomas Payne had given her debut. So, though lyrically still treading very familiar ground—which is potentially dangerous considering how this music relies heavily on Higgs’ voice, especially on those slow-blooming opening tracks—the songs are sonically well-crafted and interesting enough to never be seriously hindered; this is fortunate, since some of the broader sentiments here can be just as unexceptional as the press release’s description of them: “[Higgs] has had time to stare out more windows, take longer drives across the country, spend more time with children, and perhaps even fall in and out of love a few times.” Hard to argue with the windows-and-children approach, and hopefully it’ll reveal itself more fruitful on her upcoming sophomore LP, but for this EP it’s too bad it doesn’t make for lyrics as strong as the music.

It’s the tracks that find a comfy middle ground between the two extremes of the EP—“Little Voice” at the folkiest and most immediate end, the comparative abrasiveness of “Drunk Love” at the other—that sound the most realized and promising. The transition in “Miserably Together” where Higgs kicks into the immense ooh-ahh-ing and ba-ba-ing of the chorus, a shift echoed in short turns with “Asleep All Winter”‘s wordless hook, captures her voice at its most focused and melodically powerful, balanced by the lilting self-harmonies of the former’s verses and the whispery dream-pop delivery of the latter’s. Moments like these, as well as the impressive bookends surrounding them, make Little Voice such a surprising and welcome step forward for Higgs, and hopefully a sign of even better things to come.