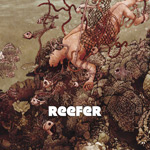 Since Toph gave so much (justified) flack to Kevin Barnes’ latest dick-out romp through the murky waters of pretension, I think it’s only fair to briefly discuss Nick Thorburn’s overdramatic schlockfest, Arm’s Way, seeing as we didn’t get around to reviewing it. I’m not implying with the Barnes’ comparison that Islands’ sophomore foray was an indulgent mess of gender politics and “Hey, look at me and my gayness!” pandering, but it was, still, a mess, Thorburn digging deep into his Thorburn-ness and his (apparently deep) well of Thorburn-isms, playing out like a lesser artist aping and attempting to adult-ify the death-obsessed and thoroughly adolescent pop brilliance of Who Will Cut Our Hair When We’re Gone (2003) by masking those deficiencies with the faux-lushness of strings (“The Arm”) and barely enticing dance grooves befitting of, ugh, Ratatat or some such (“Creeper”)…stuff that would be far beneath (dare I even go there?) Nick Diamonds.

Reefer feels like a pleasant departure from that tired self-parody; tossed-off but in a good way. It recalls the whimsy of The Weather (2003), which sounded like three guys (Daedelus, Busdriver, and Radioinactive) passing joints and watching bad movies in someone’s basement but slapping together samples and rapping during pee breaks. The comparison might seem odd, but it’s applicable here: Thorburn doesn’t sound like he’s trying to take the next step in his progression as an artiste; he’s content to fall back into his alternately sublime and strained tone, sincerity and lyrical quirks holding up his end of the bargain adequately. Daddy Kev is somewhat complacent as well, backing Thorburn’s vocals with distinctly Hawaiian melodies, keeping everything cohesive and within the same basic vein without allowing the arrangements to grow stale over the course of his nine tracks.

The album truly commences with “May Baleen”—beating the listener over the head with the whole “island” theme—sampling waves lapping on a shore and juxtaposing it with a slow ukulele groove as Thorburn muses about nautical matters, narrating some vague story of lost love and journeying across the sea. This should probably sound lazy, but it melds into some innocuously titillating exercise in the oscillation of Thorburn’s voice. “Body Heat” further establishes Thorburn’s malleable tone as a formidable instrument, his whisper through the verses sexy and coarse, escalating a bit on the hook, intoning, “This is how the body breaks” as his voice simultaneously disintegrates. This premise doesn’t hold true throughout, though. On “Let It Go,” Daddy Kev’s attempt at dreaminess combines disastrously with Thorburn unsuccessfully mustering something like tenderness, reaching down throats to tug at heart strings but regrettably forgetting about gag reflexes.

When we get a bit too much Reefer (insert stoner joke here), we have, um, entirely different entities to disrupt the homogeneity. Thorburn is barely present on “Crony Island” while Busdriver’s downright furious nasal staccato provides a welcome reprieve from all the beach chair fodder, essentially carrying out an exercise in precise syllable gymnastics: “I just felt like a crustacean / Sub-human / So I gave myself a nice plug tuning.” And two somewhat superfluous, but still serviceable remixes from fellow LA inhabitants Flying Lotus and Dntel add some variety, subbing out Daddy Kev’s tropical casualness for warped soundscapes, the former opting for Purgatory-exploring dreaminess and Dntel pushing his head past the clouds into the far reaches of space. It might seem like a slight to say part of what makes this Reefer album good is the fact it’s two members aren’t always involved, but ho-hum, what does result is a concise, enjoyable concept piece about doing nothing in particular.