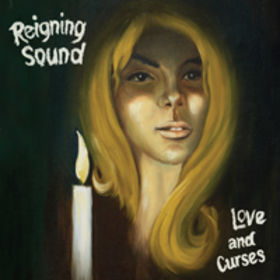 These guys’ last record, Too Much Guitar (2004), presented us with a thick spectacle of noise. What that means in this day and age, I’m not sure, but listening back to the best songs on that record is like hearing a band gallantly coming abreast to its own tailspin. What they were doing then was exercising power and also a weird form of restraint, and I guess for a band that presupposes itself on rocking hard and fast, adhering to everybody’s notion of what the best guitar rock band in America should sound like—i.e. crunch crunch cymbal crunch hollerrrr—the concept itself of “restraint” is verily weird. Thing is, if anything, Too Much Guitar came on more full-force and brutal than anything the band had tried before.

What’d changed was that Greg Cartwright and his merrymen, rising to dominate this hellbent miasma of amplification, had subsumed some of the more subtle flecks of their old material: songs like “Wait and See,” which navigated through curly guitar figurines and the carefully plotted movements of Cartwright’s delivery (holding back, swinging forward, kept quiet sometimes by the austerity of it all); relative austerity, I mean. Too Much Guitar basically went to work on that with a set of razorblades and a mallet, and in doing so left us a rough-hewn ride, a chortled suite of songs skinned raw, scratching, and sensitive whilst pushing headlong towards the red. Most sounded like a different sort of blister in the sun; only a really experienced band could pull that shit off.

Love and Curses, the group’s first studio offering in four years, levels us with a different sort of experience. Though it’s wrong to call this a “toned-down” record, it is very much a return to the more studied, explicitly recorded sound of the material found on Time Bomb High School (2002). This isn’t necessarily a bad thing—Cartwright comes across as a natural seemingly unable to write anything but really amazing song—and this record contains some real welcome additions to what’s becoming (cough) a formidable catalogue. But hearing full-on material like “Broken Things,” where the band lets off running dispatches of unfiltered rock—guitars thrashing atop galloping drums—one can’t help wishing, I dunno, things were louder? Or that the rhythm guitar’s treble was notched ten-fold so Cartwright’s hustling voice might have something more to grapple with? Same goes for “Stick Up For Me,” where crisp, brash keys smother what seems like a song that should perhaps play it a bit fast and loose. When a guitar solo tears in, it’s almost as if it’s hanging above the arrangement as opposed to sluicing through; what before came across as frazzled desperation is tethered to reveal formula.

Of course, the mix works wonders on the slowed-down numbers. “Love Won’t Leave You a Song,” in particular, with its time-honoured juxtaposition of guitars ringing along to a sunny-sounding organ line, is a real peach. And more often than not, the relatively lukewarmed backing lets Cartwright’s bruised-up delivery—the way he tosses around a track—take precedence like the big weapon it should be. Platitudes and “Alrights” are given the same shrift as venomous wit, the overall effect being, when married to a real rousing vocal melody (“Trash Talk,” “Banker and a Liar”), a riot.

That said, one sorta yearns for a live record (like this year’s re-released Live at Goner Records) to reveal the true monsters I’m sure are lurking beneath the veneer here. I do think this band sounds best when they’re trying to break some strings, but Love and Curses isn’t the record to do that, instead a measured, elaborate, and purposeful testament to knowing where one is going. Everything is in complete control, which says a lot about their zen-like mastery of the garage rock cubbyhole, but for me half the fun was the audible battle happening right there in the mix: the sweet sound of instruments bucking around, splashing cold water into cold faces. This, as of now, is more like high-class co-op.