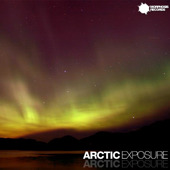 It’s becoming increasingly common for smaller labels to release their mixed compilations in two simultaneous formats, to offer both an en bloc MP3 and an unmixed set of tracks. Sometimes you get both for the price of one; more often you have to pay for them separately. Arctic Exposure is the second expo from Hungarian web-label Morphosis in the past six months (the other one was Evolved Breaks, one of the best mix compilations of 2009 that nobody heard) and unlike its predecessor, you have to choose which version you want to buy. So unless you’re a DJ who wants the full tracks to play with, it’s recommended you buy the full, single MP3, the unmixed version turning out to be a very mediocre affair indeed.

While the label is best known for its breakbeat output, Arctic Exposure is comprised entirely of melodic 4/4 beats, ostensibly themed around the winter season. This flavour of airy and atmospheric house is abundant amongst European web labels right now (notably Mistiquemusic) and there’s little to distinguish the tracks here from any of the other glut being released week in and week out. Plus, the winter theme is more or less in name and release date only: these tracks might make sense cast over a snowy landscape, but the slightly melancholic, sweeping ambience they evoke is picked out in the same minor-key pads as countless other tracks that would fit a snowscape as well as just about any standard nature scene. Without any twists on the formula these very nice and very pleasant selections rapidly become background music, evoking a niche brand of clichéd panorama.

Most of the unmixed tracks contain long sections of entirely percussive intro or outro buttressed with practical arrangements. It’s when label owner Retroid steps up to the decks to put the music into context that everything falls into place, when tracks that lack structure and direction individually become building blocks of a larger pattern, when a groove comes to throb and mature across the whole recording. Comparing the two format versions of the mix can be fascinating, an illumination of just how important the DJ is to so much dance music.

The mix begins almost in Germanic neo-trance softness with the undulating pads, time-stretched harmonies, and reverbed rimshots of Constant Progress’s “Le Cygne Cristallin” sounding closer to laptop ambient than to anything meant for the dancefloor. Retroid builds this deliberately soporific tone almost imperceptibly across the next four tracks, nudging the tempo slightly, incrementally. This gentle build crests with the big room vocal of Uriel’s “World Of Love,” and suddenly the set snaps into the foreground. From there Retroid segues into the mix’s most soaring moment, Michael & Levan’s progressive house remix of Retroid and Fretwell’s “Vertical Horizon.” These, together, form the standard to which the rest of the compilation should aspire, and from there gears shift into the sturdier grooves of the record’s second half. It may seem unusual programming to peak the mix halfway through, but Retroid’s pacing works surprisingly well in giving the overall set a drawn-out ebb and flow to complement the protracted melodic bleeds comprising each self-contained track.

That said, there’s nothing revolutionary or awe-inspiring about Retroid’s DJing, but he plays the genre as it was designed, melding everything together with liquid smoothness and no discernible joins. It could be said this is limited music, music that requires a DJ’s guiding hand to sound any good; it’s undeniable that the cast of Arctic Exposure isn’t nearly as cohesive as the one Retroid assembled for Evolved Breaks—despite the presence of some otherwise reliable names—which were more varied and more inventive, ranging from ethereal ambient pieces to dark electro-edged bangers, working as well alone as placed together. Even so, Retroid deserves credit for fashioning such an enjoyable mix out of the music at hand; in its utilitarianism it succeeds: likely to appeal to those who have a taste for electronic music that rides the line between dancing and heavy-lidded shoegazing; those who embrace the best of both worlds.