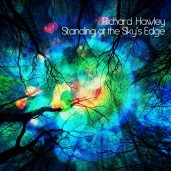 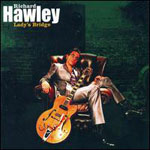 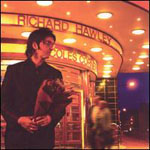 The first time through Cole’s Corner I had absolutely no idea what to make of the record. Here’s a man who sounds like he belongs in a different era entirely (think Sun records 50 years ago), with a set of arrangements that I would loathe except they’re done near-perfectly, and a sort of timelessly heartbroken lyrical matter. Yes, it’s a crooner record. Yes, the man has also played with Pulp, The Feral Cats, and Relaxed Muscle. And no, I have absolutely no frame of context for this record. With that in mind, I attack it as what I do know it is; one of the finest singer-songwriter albums of this year.

So let’s go at this one piece at a time. The obvious place to start is with Hawley himself, or more specifically his voice. The voice makes most of the rest of this record extraneous. His deep, prematurely aged baritone is a force to be reckoned with; He could be singing the Sheffield phone book over Metal Machine Music and he would sound sexy. I can think of no contemporary points of reference, at least within the indie realm, but there are definite elements of Roy Orbison, Frank Sinatra (it’s in there), a bit of Johnny Cash (“(Wading Through) The Waters of My Time”), and plenty of Scott Walker. The way he sings is seemingly anachronistic as well, just lazing along, stretching out his phrases, and every once and awhile just stepping up and knocking a chorus out of the park (see “Just Like the Rain”).

But the voice isn’t everything, and that’s what puts this record over the top. Lyrically, Hawley is a pro. This is his fourth album, and he knows how to write the sort of sincere lounge lizard lyrics to match that voice. The way he just slides into the title track is brilliant, opening the album with the plea of, “Hold back the night from us / Cherish the light for us / Don't let the shadows hold back the dawn.” The gorgeous, autobiographical “Born Under a Bad Sign” makes self-contempt sound deeply sexy as Hawley lets loose with, “And all of your life, staring at white lines / Reading the road signs, and oh what a loss / Sleeping late in the afternoon, playing your guitar.”

And then come the arrangements. Hawley and co-producer Colin Elliott have this down absolutely cold, nailing not only the individual songs but the arc of the album as a whole. “Cole’s Corner” starts things out lush and full, string section and all, but still places the center of the track on an upright bass and a light drum part. As they move through the album, Hawley and Elliott strip away layers, leaving almost nothing to accompany Hawley on “Who’s Gonna Shoe Your Pretty Little Feet?” and only the sparest of arrangements for “Last Orders.” In between we get the quiet shuffle of “Wait for Me,” “Born Under a Bad Sign” with its psychedelic pop, and the country-western ballad feel of “(Wading Through) the Waters of my Time.”

This record came out back in September of this year, and some of you may be wondering why we took till December to get around to covering it. It’s a valid concern, but it many ways it’s probably better we didn’t go at it right away. There’s a fairly good case to be made that critics should give albums some time to age before laying into them, but it strikes me that it may be more true of Cole’s Corner than most. That, plus I was convinced David Greenwald was gonna cover it.

We’re all trying to process an enormous amount of music at the same time, come to conclusions, evaluate, and write, but I’ve found that for me there are usually records every year that I come back to over and over again, long after having reviewed or others have stopped talking about them. They’re not always the best or most technically accomplished, but rather the ones that I connect with and just want to hear when I’m tired, worn down, or not working on another review. Andrew Bird’s Mysterious Production of Eggs and Emperor X’s Central Hug/Friendarmy are those sort or albums that I’ve stumbled across this year. Cole’s Corner seems to be the third.

Richard Hawley has managed quite a feat with Cole’s Corner. Not only is it an excellent album, it also withstands multiple listens, refuses to bend to any current ideas of what singer-songwriters should be doing, pays homage without becoming either stale or caricatured, and, at least for me, become one of those records that I would rather listen to than just about anything else that came out this year.