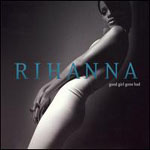 There's a readily discernable trend in modern R&B for a new type of uber-chanteuse; singularly monikered and ruthlessly acetone, these female vocal outlets are galvanised creatures, presented with all the gloss and depth of a newly sculpted bottle of scent. The singer is often employed as more of a gilding effect than they are as a central pillar, with the true draw of any particular song laying in the clarity of the drum track and the shading and positioning of the synth accompaniment. Invariably this leads to some fantastically heartless, deep chrome singles that pack a meat locker production stamp, followed by an album padded out with uneven copycat filler. Strangely for such a bleeding edge pop trend, it directly recalls the early soul albums of the sixties, a new paint job applied to the old practice of raising a raft of lesser material around two or three obvious hits. There are hits on Good Girl Gone Bad, big clubfisted ones, but they're wedged in with facsimiles and reductions.

Almost an even split between a blitzkrieg of a first half and a restrained second, Good Girl Gone Bad is a dead eyed B-movie script executed with an expert grasp on market trends. You can smell the cordite and trace the battle plan etched into the spiralling bullet striata on every track that comprises its opening five burst assault. In terms of power it's a precision built entity, however in terms of making a fleshy, human connection it's a SCUD, approximate and imprecise. "Push Up On Me" is reminiscent of those engineered fucking machines (yeah, you've seen them): there's no room for subtlety or misinterpretation, it's just dedicated, rigorous machinery achieving a basic presubscribed result. Sex isn't treated as a practice involving warm, sticky contact; here it's more a reductive brew of sleek pumping joints. This oxygen-free sterility extends to the Michael Jackson squeals utilised in Don't Stop The Music, which are treated like chaff released from an F-15, a distraction to divert attention away from the track's bare framework. The structure is exposed! Deploy the Jackson counter measures! This fundamental unchanging functionality deadens the album, the core whizz and dazzle of the opening half reducing Rihanna to an eruptive booster whine. She's unable to form an effective yoke, seemingly having no discernable control over the thrust of the surrounding metal, existing simply as a vague explanatory exhalation of where the musical force is being directed.

That the second half of the album dumps the fuel and eases off on the throttle comes as no surprise. It's rare for such a carefully designed album as this one to be built completely on zingy platinum ferocity. Unfortunately, when the clattering marvel is stripped away we're left with the usual overly pristine acoustic guitars and stardust glitter that R&B often reverts to as its fallback position. Timbaland arrives late on to twist and knot the formula a little, his wailing deep brass march on "Lemme Get That" being his most effective moment, but it's a half-hearted rescue buried beneath layers of vaporous cooing and navel gazing. Given the stage to express herself without the distraction of the rush hour cacophony that deafens the opening section, Rihanna emerges as the empty vessel that we fear she really is.

Maybe it just comes down to this: maybe all most people really want from a big pop detonation these days is actually all most people want from any mass consumptive art form. We want it big, we want it bright and we want to hear/see the money. I know this sounds like the usual rant about some nebulous "soulless commerciality" conspiracy, but the new Rihanna offering really does exist on the same emotional plane as Michael Bay, HSBC and laser guided weaponry. At the heart of everything is the woman herself, encased in Armoured Core production, a cipher plugged into ten tons of hydraulic heft; Rihanna angry? Button pressed, drums bludgeon, emotion crushed. Mmmmm, power good. That's not to label Good Girl Gone Bad as an unsuccessful record or that it is in any danger of missing its mark, it's simply to say that any inherent accomplishment is far more effectively demonstrated under the auspices of sonic precision than it is as a showcase for recognisable human feeling. It's a tooled, gleaming engine with the sole aim of achieving dominance over every radio and television play list. Shock and awe.