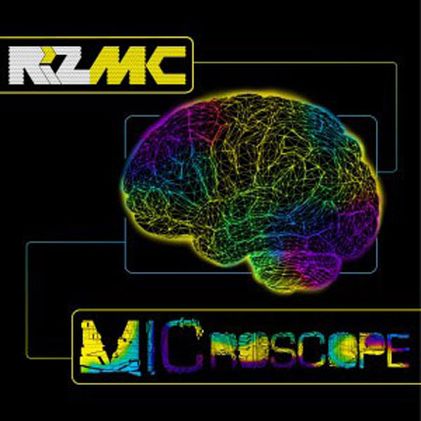 Actors switching to hip-hop is a terrible idea and usually a well-documented disaster, particularly when the process happens in reverse and you wind up with car crashes like this. But rising Brit welterweight Riz Ahmed has been rhyming since long before he stepped into the limelight, and has been steadily using his leverage ever since to assemble professional backup for his long-long-awaited debut. Just as cautiously as he’s selected his film roles (drug drama Shifty, zombie satire Dead Set, and suicide bomber comedy Four Lions), he’s chosen producers Lazersonic and Redinho to help kit out MICroscope, the kind of targeted, high-kicking concept LP that a whole band might come up with if struck by lightning, or locked in a bank vault and forced to think.

Riz MC is definitely of super-vault intelligence—he’s a conscientious Oxbridge graduate with an ear for the street, like Stephen Fry in Reeboks—and MICroscope is his 30-minute war against the complacent, stirring up trouble like a bomb in a wasps’ nest. For a self-released celebrity pet project, that’s a fantastic thing, and proves Ahmed must take his music very seriously—seriously enough to be good at it. It’s not often you get to admit the press sheet was right, but on reading the lines “Uncompromising and diverse… Blends pop, drum and bass, grime and electro… Blends hyperactive funk and dense bass,” and then on seeing how well MICroscope fuses its breaks, rhyming, and nods to Facebook culture, it’s obvious how exemplary Ahmed’s MC skills are. This might be the most high-calibre and confrontational piece of celebrity art since Hugh Laurie wrote The Gun Seller then pulled off his mask in the publishing house and said, “Yes—me, from the Alliance and Leicester ads!”

Split over ten tracks, the longest of which exceeds only four minutes, MICroscope purports to be an interactive record where repeat visits to Riz’s website:http://rizmc.com/ reveal games and deeper twists. It’s also a record explained by its title, as it’s essential to focus hard while Riz’s rhyming hits like blasts of calculus. Taking strands of topical fakery and pressing them hard under a glass slide, MICroscope isn’t an easy seduction. In fact, if you’re a hermit and make it as far as “Don’t Sleep,” you could be forgiven for thinking the world is 60% dicks. “I am going out in a blaze of glory,” gasps Riz, a very long way from Bon Jovi as he tracks a hedonist’s route to midnight (snorting coke out of his shoe, beating up strangers, and then grinding with hen’s night girls). Lazersonic’s drums thud like artillery as the images of destruction flash harder, the narrator flooding his liver with Class As and then watching it fight back with cocaethylene. There’s equal malevolence in “Radar,” which throbs with the intensity of an army of marching Terminators. “I can’t turn my radar off / I can’t turn my radar off / Anyone, anything, I’m-a put it in a box / And when I look in the mirror I just see the labels / Eyes stay dead and flashing.” That’s the first track on the album—hi-tech, street-smart, and aggressive—and it’s begging you to expand your mind and shed preconceptions.

Riz’s conscience extends beyond his more open-minded listeners, frequently snaring targets even the press doesn’t like to tangle with. On the towering bass of “All in the Ghetto,” he explains how everywhere outside of Sandbanks, Dorset has been homogenized into one ghastly designer village, touching on his native South London fear of the shit that’ll come with the Olympics. “Once it was rubbish and budget and proper thuggish here / Then ‘We wanna rough it! We love it! We’re taking over here!’ / Locals don’t like this / To the cool new parties they ain’t invited / It’s your trashy phase but it’s how I live / What the fuck’s a latté? What’s with these prices?” Its humbling, 8-bit chorus and tales of how PhD students annihilate estate communities hit hard—in fact, it might just be the biggest weapon against class tourism since Pulp’s “Common People.”

His aggression goes even higher on the cybernetic migraine of “Hundreds + Thousands,” where he and some other de-layered recession victims storm Canary Wharf, shaking down project managers and all the financiers who underwrote the balls out of the economy. This isn’t just an excuse for Riz to show off his formidable spitting skills (though he does: verse one boasts a 35-second tirade without a single inhalation)—it’s also a call to arms for anyone who’s been prosecuted since 2009. “The thieves at the top got government cars / Expenses cards and Westminster yards / Did I mention that we left them in charge / And you’re getting charged for taking a Mars Bar?” Redinho lines up feathery beats behind Riz, restrained after the pumping dubstep of “Dark Heats” where he brutalised some accent-shifting schmoozers. It’s just a two-minute slice of the bile on MICroscope, all of which comes from a card-carrying actor who’s got bigger issues than callbacks.

At the end of “Sour Times,” where the MC ponders over serene strings why his religion has been demonized, I was expecting Riz Ahmed to draw breath for fifteen minutes, having finally spat himself hoarse. But nothing; just a graceful fade and goodnight. MICroscope flows so silkily, and features such well-bred engineering, that I’d defy anyone not to at least file it under “Re-investigate.” Over five years and around an international filming schedule, Riz MC has managed to use his credentials to mount a dazzling attack on what he sees going on in Farringdon Road, and has emerged with the kind of crossover masterstroke that could outshine the National Curriculum.

He might even convert a few lurkers to hip-hop, probably more solidly than “Walk This Way” if he had a major label behind him. But Riz, a confirmed technophile (again: look at his website) isn’t seeking management, and tells EMI where to get off only nine lines into “Radar.” While everyone in the country’s busy downloading The King of Limbs and debating Thom Yorke’s mojo, why not part with seven hard-earned pounds and hear something truly incendiary—something which features even more mojo, a draw full of sex lube, and nightvision goggles?