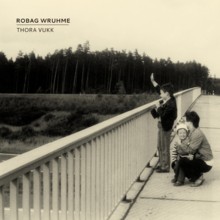 Gabor Schablitzki’s first album as Robag Wruhme, Wuzzelbud “KK”, arrived in 2004 offering the kind of schizophrenic rhythms artists as diverse as Ellen Allien, Isolée, Hrvatski, and Jason Forrest were all doing far more brashly. It was a good album, reveling in electronic music’s then-obsession with parsing the joke while poking you in the face, but it was maybe a bit reserved for the time: the difference between edge and interstitial, like how carefully thinking out your spontaneous punchline often means it’s too late to drop one. And maybe Thora Vukk seems similar, in a way: there’s a vast difference between then and now, though there’s a sort-of bridge formed by Schablitzki’s own singles and his work with in the Wignohmy Brothers, but again Schablitzki seems behind the curve.

Because none of the ideas Gabor Schablitzki tries out on Thora Vukk are especially novel: fleeting snatches of sampled vocals maneuvered into percussive rhythms that double and therefore texture harmonic lines, using acoustic instruments as the base for electronic music, and contrasting slow mini-crescendos against popping syncopations. Neither might you think, on first listen, that this is a particularly adventurous album: it’s slow, measured, and though the palette is neat more traditional house beats enter underneath the more abstract material to keep the music grounded in Robag Wruhme’s house roots. With some Peter Gabriel-esque mallet runs. On paper, it’s a spreadsheet; all the columns equalized.

There’s a difference, though. If Wuzzelbud “KK” seemed like a studious kid trying a hand at playing the class clown, Thora Vukk seems like a confident artist trying a hand at masterfully exploiting the properties of a specific set of parameters. And it’s Thora Vukk’s clear sense of purpose—even if it is, yes, unadventurous—that makes it my favorite electronic album of the year thus far. I think part of that is how good Schablitzki is with long form structure. It may not seem, for example, that a whole lot is going on with the title track, but the way he plays with that syncopated, phased percussion, letting the riff linger before letting loose with a cavalcade of plaintive synth tones in ringing harmony is fascinating. Again, house is built on tension and release, so this is nothing new, but as the track progresses Schablitzki starts to combine different portions of the full track into a series of vignettes, like slowly pulling the blanket off a really large painting. The ideas are simple and immediate; the scope is epic, is how it plays out, songs and song moments moving beyond house tropes into something resembling a story arc. Watch how opener “Wupp Dek” deploys that plucked string harmonic in a variety of brilliant ways; it’s a bookmark throughout the track, a puncture point where Schablitzki knits the rest of the track’s flesh together. Every time it rings the film reel skips, shuffling into motion with a new set of visuals.

And even when the album gets more intense (…relatively), with “Bommsen Boff” and “Pnom Gobal,” Schablitzki manages to maintain the tone of the earlier tracks’ aesthetic while shifting his palette. The former’s noise sits tight above a wobbling synth bass, different strands of percussion panned around the spectrum like differently textured fabrics you might reach out and touch. Texture, really, is another area Schablitzki excels: the production on Thora Vukk is dramatic and deep, and played loud the thing is just enveloping. “Tulpa Ovi”‘s piano chords—which incidentally sound like somebody killed the saxophone that just should have been playing over them—are pools you can wade in, shimmering over a brilliant fissure of high hats and synth percussion that sounds right on the edge of being off.

In short, Thora Vukk is playful and fully realized, never sacrificing the gorgeous aesthetic Schablitzki seems intent on fully exploring for the sake of blowing the listener away. These tracks build, each element a crucial part of the ongoing discourse, building between and around the ever present sense of self this album clearly displays. Yes, maybe this punchline is too late to be dropped in the conversation that provided its spark. But it’s just so good, so why not listen?