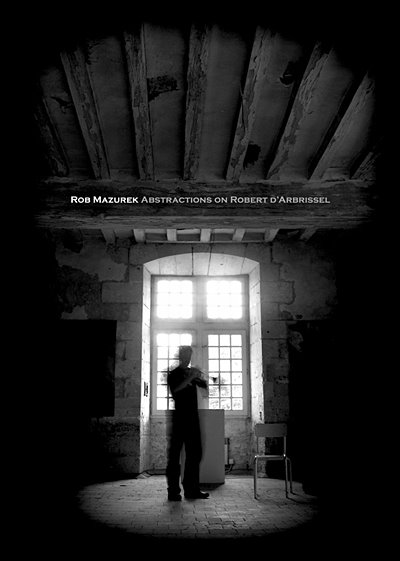 To play solo in sometimes imposing environments must require a good deal of vulnerability and self-sacrifice. In this respect it’s fitting that Rob Mazurek’s (mostly) solo cornet outing, recorded in the abbey of Fontevrault, is dedicated to another Rob—the abbey’s founder. Robert of Arbrissel’s mantra was “In nakedness to follow Christ naked upon the Cross,” and he was never canonized because of “extreme indiscretion in his choice of exceptional ascetic practices.” That’s an epitaph whose actual meaning I shudder to even imagine.

When I opted for the cornet over the trumpet at the tender age of ten I probably did so just to be different, but I still have a fondness for the instrument. While the trumpet penetrates the air, the cornet—with a mellower tone and rounder edges—dissolves in it, making it the perfect sound to reverbrate around the cavernous walls of the abbey. Even with Mazurek’s free jazz/psychedelic/fusion onslaught Exploding Star Orchestra I got this sense that his cornet was in the service of blending with and subtly transforming the environment rather than contrasting with or accenting it, two qualities that most often characterize free jazz. It’s probably more suited to classical than trumpet, which loosely describes what Mazurek is doing here, though in reality—despite the lack of overdubs and raw playing—he’s more interested in pure sound and reverberations than melody.

Abstractions on Robert D’Arbrissel is intimate in a near-voyeuristic sense, like sneaking up behind a monk practicing his instrument in private. The silence between his winding passages feels unhurried, his playing for no other instrument besides the walls, which he gives ample time to reflect his own tones and die out before he starts again. Eleven minute opener “The Body” starts out with clear tones but gradually moves into abstraction, as if the melodies were gradually dispersing themselves throughout the massive building in a non-linear, multi-directional fashion. Fittingly the titles attest to presence and absence, immediately contrasting “The Body” with “The Non-Body,” a track which seems to conversely start with the echoing chambers and suck all the air back into the harrowing apparation of the cornet.

The next three tracks document the bodily death and ascension: again the burden of blunt physicality (“The Tomb,” “Dust to Dust”) and the rootlessness of spirit (“Meditation and Skyward Motion,” perhaps made a little too literal with the presence of birds chirping). But then Mazurek returns to the body in fragments. When Jesus sat with his disciples at the Last Supper, he said “This is my body, broken for you,” an account of the very literal dispersion of Christ’s physical existence, but also interpreted symbolically as the body of the Church made up of many actual bodies, each with a distinct part (“The Head,” “The Torso,” “The Legs”). Hence why the Last Supper’s re-enactment among congregations is called “Communion.”

The inclusion here of other instruments could have robbed the recording of its intimacy, but the piano on “The Feet” feels as incidental as wind chimes, and is the best link to the multimedia works Mazurek conducted in conjunction with the recording—see his transformation of stained-glass windows into colour modules. Likewise, the piano on “The Legs,” similar to Beethoven’s “Moonlight Sonata,” furthers the sense of these sessions being like remixed versions of humble church musicians practicing in between services.

Finally, “Sound and Silence” finds Mazurek completely abandoning himself to his surroundings. While nominally the end of the record—with several minutes of silence then the shuffling and voices of (presumably) tourists alongside even more incidental piano—could be an inconsequential bonus track, it works so well in the context of haunting absences that it becomes a key part of the album. The voices are unintelligible, the echoes of footsteps indistinguishable, a reminder that in the wake of both Roberts of Arbrissel and Mazurek will come strangers attempting to position themselves in the ongoing path of history. Like Mazurek himself they try to connect with people they will never know.