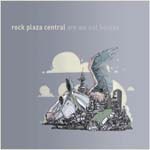 Are We Not Horses

Whether you will enjoy Rock Plaza Central’s third album, Are We Not Horses, depends on two factors: First, how do you feel about Will Oldham (Palace Music, Bonnie “Prince” Billy), Jeff Magnum (Neutral Milk Hotel), and Ray Raposa (Castanets)? Second, how do you feel about bands that come dangerously close to ripping these three guys off? We get plenty of music here at CMG that spark dismissive adages about imitation, sincerity, and flattery, but staff reactions generally vary on a disc-by-disc basis. Some are willing to give, say, Black Mountain, a shot. Others aren’t so forgiving. Probably the most subjective call we make as reviewers is in deciding whether something is “sincere” or “honest,” and it’s a judgment I was hoping to avoid this week. Chris Eaton and his six compatriots, however, aren’t making things easy.

Put simply, Horses has a few songs which are painfully similar to its inspirations. “How Shall I To Heaven Aspire” should be immediately familiar to anyone who has ever listened to I See A Darkness (1999). The Neutral Milk Hotel influence on “My Children, Be Joyful” is so pronounced you start to wonder if it wasn’t originally an In the Aeroplane Over the Sea (1998) b-side. “Fifteen Hands” and “Are We Not Horses?” are probably the worst offenders, and if you can't hear why, buy Cathedral (2004). Now.

But the thing is, once you get past that first half a lot of this fades into the background, and Eaton emerges as a songwriter in his own right. It’s actually sort of startling: come track seven the album shifts, finally tosses the safety blanket woven from these treasured albums away, gets original and really, really good. And within that goodness, even if Eaton occasionally slips into an Oldham-ism, especially on the jokey “8/14/03,” the voice of the song is clearly his own. Both parts of “When We Go, How We Go” are triumphant and lovely, while “Our Past, Like Lighthouses” is a beautiful little folk song. “Our Hearts Won’t Rust” has that Oldham twang to it, but there’s a raw power to it that makes it work. The closing track seals the deal, with the full band fleshing out the far reaches of the song and joining in with Eaton on the simple, powerful refrain of “you and I / we’ve got a lot to be glad for.”

This is a band with some pretty obvious potential -- rarely do you stumble across an unsigned act with this much raw talent and excellent production skills (the disc really does sound fantastic). Hopefully they’ll be able to shake the Oldham fetish a bit, or at least work toward a more unique vision of his music in the future. At the least, Horses hopefully leaves enough of an impression to keep us music critics anxious for more.