Other Records by Rocky Votolato 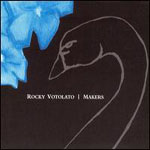 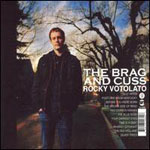 Rocky Votolato, like Jeff Tweedy and Ryan Adams before him, has always had the archetypical alt-country voice: grilled to a crisp and whiskey soured. Now it's the musical chops of those predecessors that Votolato's aiming for. Tweedy's work in the seminal Uncle Tupelo and Adams' Heartbreaker (2000) both weigh heavy on The Brag & Cuss, Votolato's fifth solo album. It's a rootsier, more country-influenced album than last year's Makers, full of harmonica breaks and guitar licks as Southern as Colonel Sanders.

The songwriter is certainly Kentucky-fried, with a predilection for the past and, as evidenced by Makers and its title track, a penchant for alcohol. "Jack Daniels in one hand / Basic Light in the other / my best friends for so long I can't even remember" he sings to open "Postcards from Kentucky." One would think this would sound a little self-conscious coming from a guy who records for Barsuk (not Bloodshot) Records, but Votolato performs with a gravitas that's hard to refute. While well-suited for ballads, that well-cooked voice of his carries the raucous moments in songs such as "Lilly White" and "Red Dragon Wishes" to fiery heights.

It's the "alt" portion of alt-country that he really excels at in songs like those, with their electric guitars injecting a much-needed jolt of energy. The Brag & Cuss takes advantage of a full band, making for a more playful album than its predecessor: note the light percussion on "Blue Rose," which follows a rhythm more Brazilian than country-western. Honky-tonk ballad "Your Darkest Eyes" nails its barroom atmosphere, especially when Votolato intones "No one else was ever / half this beautiful / no two hearts were ever half what ours was whole." It's as good a rhyme as any of the three (!) two hearts/lovers/entangled people choruses on Adams' just-released Easy Tiger, if not a competitor for those classic Heartbreaker tracks. (Not that Votolato doesn't try: the loping pace of "Before You Were Born" makes it a dead ringer for "My Winding Wheel.")

While it never outshines the alt-country canon that precedes it, The Brag & Cuss is a welcome addition to the genre, an album that understands its influences and rarely oversteps the boundaries they've set. All it lacks is the hard-won charisma and character of critical records like Heartbreaker. Still, Votolato sounds like a songwriter who's going to be around for a while, and with any luck, he's got a classic in him yet. Now if only somebody could get him to lay off the sauce.