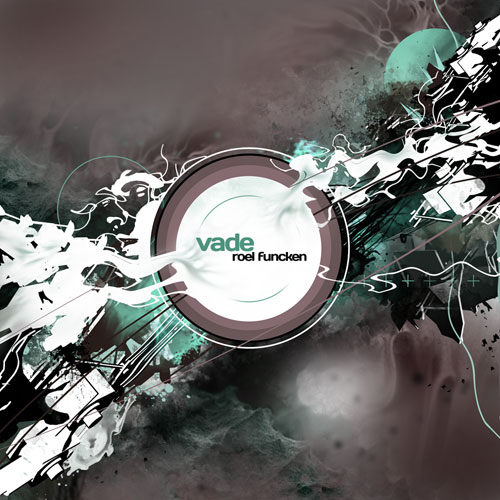 Some may know him as the younger-brother half of Dutch IDM stars Funckarma, but Roel Funcken is more than just owner of the coolest surname on the planet. He and his brother Don hold an eleven year record for making the frontiers of techno malleable, demolishing the genre’s more pompous breaks and then raising them to fit whichever mood’s applicable. The effect is less cartoon-y than you might think—Roel and Don turned some serious heads when they teamed up with hip-hop heavies Shadow Huntaz—and on Funcken minor’s carpet-bomb of a debut, it’s the universe of dubstep that gets funcked.

Those in fear of an over-egged pudding (monster bass served with digital noodling, not so good on the intestine) can dispel their fears and prepare for a bawdy electric marathon. Vade‘s sixteen experiments hit like punches, crazy as cold fusion. Over seventy minutes Funcken displays an extraordinary ability to have revelations while cutting loops, and also demonstrates such otherworldly drum programming I’m surprised the Feds haven’t sealed him in Nevada.

The first thing you notice about Vade is how chameleonic it sounds: Funcken isn’t trying to launch his own style here, just jink things in his favourite direction of the day. Sitting roughly somewhere between tampered drum’n’bass and advanced liquid, Vade packs enough of the diva groans and serrated low-end you’d expect from a DnB mixtape. But it also plays a game of hopscotch, occasionally breaking step to sound like rail guns being shot through a barrage of clocks. The crispy toytronica of “Vertox Dreaming” is begging to be spilled from any hatchback that’s brave enough, while the garage rush of monsters such as “Halfkriel” offers a melodic middle-eight to cling to. Funcken, seemingly sweating confidence here, undulates his tempos as whatever whim grabs him, switching from urban paranoia and half-gangster sirens to the synth pecks and church tones of “Bluent.” The man’s either been railing some serious snow or he’s seen Proem’s old shoes and thought, “Fuck it.”

Like Proem, Funcken enjoys the occasional dip into ambience, and it’s here where Vade truly leaves its mark (particularly if you listen through your beefiest set of headphones). He tends to slip his effects over one another, and so on “Lyra Stellum,” where hooks and aquatics come together in a cloud of bubbles, Funcken throws in further detail, bending metal till it shrieks into the mix. And all this without sign of that ominous egged pudding. Equally impressive is “Ledge”—which for my money is one the most original ambient tracks produced this century—and the way it begins with microphone failure before drooling into elastic pads, the drum thumps hitting like a leak. It may be a little dark in tone but the doctored harpsichord will keep you hooked. Hell, even the record’s cover art could keep you hooked…if not a little curious, at least.

If you are curious, then trust me: Vade is probably for you. This is no ordinary over-elaborate novelty record, this is a set by a veteran pioneer who respects his listeners enough not to dick them. His mix of zippy drill and hard-edged lasers is as crazed as you’d expect from a Dutchman, and despite the occasional headfuck of Formula 1 noise mixed with global warming it never becomes unlistenable. Not unless you’ve got a phobia of grunting jungle/shimmering glyphs/Formula 1, that is. Even the signing-off piece, “Lajor Mazer,” fakes you with more than just its spelling: it packs a devastating final plod, each of its smashes like a chisel to the spine. I can understand how some people don’t want their spines chiseled (damn you, chiropractors), but if you wish techno was as fresh as when it first seduced you or you’ve coined the term “futurestep” and now fancy cashing your chips in, I recommend Vade today. It’s feasible the whole thing might even be a time capsule sent back from a future that’s faster—not just faster and more bankrupt, which is the one we’re currently on course for.