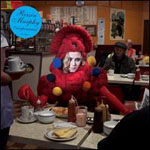 “Kick. Snare. Kick. Snare,” cry the pro-Herbert camp. “Murphy’s new Herbert-less effort is subpar,” somehow; they’ll despair that the mesh of interlocking jazz samples that defined her solo debut have been replaced with traditional electronic music. Superficially, obviously, boringly, that may be true, but that view misses how much better suited Overpowered is to Murphy’s apparent desire to wage combat against dance floors everywhere. Consider: post-1990s Herbert has always been a house producer without a house, his typical samples-as-intellectual-pursuit dancing around his shell-shocked beats like an international relations debate more interested in awing you with their vague profundity than getting you off. Okay: slightly unfair, since Herbert didn’t really bring his own politics to Ruby Blue (2005), but his politics and production have always tread the same line that makes people either love or hate him: it’s all about a theoretical way to approach the dance floor, and while I really enjoy that cerebrally, and even sometimes in motion, let’s face it: Scale (2006) ain’t got a go-to jam for midnight.

Murphy’s Overpowered does away with the vague textbook qualities of Ruby Blue and instead focuses on what Murphy does best: treading her own line between classical crescendo-based house/techno and balls out pop. Murphy draws from all over the European electro-community for assistance with that goal, and the results are considerably more varied and disco-textured than the sparse funk of her previous work. But here’s the rub: Ruby Blue was, and will remain, one of the finest examples of what innovative electronic pop could and can be in the aughts, even if, as a dance album, it played coy to the pre-throw down stages of getting people’s heads bobbing. Overpowered overturns Murphy’s view of the evening and less coherency’s the by-product. But that’s the balance, right? In sacrificing coherency this album has, at least in the sense that dance albums are meant to, far more utility.

An EMI artist now, Murphy also will likely get the kind of promotional exposure she deserves, and with strong opening singles “Overpowered” and “Let Me Know” she’s got a lot of cards in her hand. The former is a glorious disco track undercut by a woozy, harsh synth track that, combined with some really strange chemistry-themed vocals, subverts the normal porcelain gravitas of diva-disco and instead marries Chic! with Georgio Moroder without ever really sounding like either. The latter, with it’s excellent dancing-in-the-diner video, is a polar opposite: fun, flashy, and revolving around an enticingly familiar ascending chord/hit riff, Murphy sings lightly above an increasingly busy palette that joins a simple guitar/piano/bass drive with some wonderful synth work. “Let Me Know” is as good an example as any of how this album is consistently retro without ever sounding like it’s trying to be retro.

The two tracks in between “Overpowered” and “Let Me Know” form an incredibly strong opening for Overpowered. “You Know Me Better” smudges its high hat flurries off the kick drum before the snare stamps them out; Murphy sings strongly over a punctuating bass line that is joined by hand claps and mid-nineties techno synth. “Checkin’ On Me” sees the obvious eccentricity of Ruby Blue toned down to a subtle electricity, a very Herbert-like vocal sample tied to the bass momentum of the track rather than eating at it from the edges. The less successful “Movie Star,” a synthy rock track meant to capitalize upon Murphy’s iconic/ironic diva posturing, follows this quartet adequately, but it’s a relief to get to “Primitive,” a pretty little track and the first on the album that isn’t all-out danceable. “Footprints” shifts the tempo again, obviously indulging some Prince fantasies. Murphy does Prince really well, though, and the portamentoed synth riffs that follow the vocal lines are gorgeously retro at the same time that the funk guitar in the creases reaches Off the Wall Quincy Jones-ness.

“Dear Miami” is an odd track; it’s just so…innocuous? I don’t love it, but there’s nothing specific to criticize either. “Cry Baby” is a great rager, a thrumming mess of motorik synths and grinding percussion. “Tell Everybody” is a tad slow, but the track combines a wide variety of ideas—vocal samples, picazzo and legato strings, a whole slew of arps panned all over the place, and some odd percussion—in such interesting ways that it sounds like it’s constantly unfolding itself on you. The effect also makes the following “Scarlet Ribbon” sound positively insular; it’s a gorgeous dub-tinged ballad with Murphy’s voice soothing between open, brimming organ tones and staccato guitar hits.

So Overpowered runs the gamut but stays centered around Murphy’s personality and humor, which is crucial. While the revival of Italo-disco in the Moroder vein this past year has been exciting, Murphy stands alone where the resurrection of the pomp and circumstance of commercial disco is concerned. Her willingness to poke fun at herself (just watch the video for “Let Me Know”) allows her to soar to those vacuous heights while remaining grounded, infusing disco, pop, house, techno—or whatever else you want to call this mash—with a hell of a lot of soul. That’s why Overpowered is both impressive and incredibly fun, but fun in a way that Ruby Blue wasn’t: you don’t have to think here. Which, I mean, it’s not that one is better than the other; they’re just differently awesome.