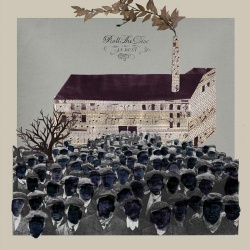 Swedes Malcolm Pardon and Peder Mannerfelt have certainly got more than a couple things going for them when it comes to crafting evocative soundscapes. For one, Mannerfelt sports a mountain beard we should all know by now at least doubles his musical prowess, and after submerging into the band’s fine sophomore LP In Dust, I’m now convinced is also effectively used to keep his face so perfectly insulated in the snowdrifts of Stockholm that he is actually able to spend markedly less time doing jumping jacks and more time making superbly creepy analog electronic music. As if that weren’t enough, Mannerfelt boasts some serious history as a locally respected composer and producer, working with bands like Blonde Redhead and Fever Ray, even rounding out the latter’s touring band with time to spare for his own projects. Pardon may not be as well known in that particular scene, but presents as respectively accomplished a background as a well-known composer for Swedish films and television, and as the cheekily literal promo photos for In Dust would suggest, also happens to strike a particularly dashing pose when covered with gallons of sandy mud. Ten points.

But that loose “composer-ly” quality, a patient and methodical approach to unfolding ominously pulsing, claustrophobic crescendos, really seems to run through the veins of In Dust. Early reviews do right by referencing some of the more Spartan efforts of early electronic masterminds like Kraftwerk and Cluster, though there’s a decidedly more anachronistic and narrative character within the framework of the record. Metallic tones and the ever-present gong of low-register piano keys press against and are transformed by building reservoirs of electromagnetic synth, not dissimilar to Emeralds’ wonderful 2010 effort Does It Look Like I’m Here?—but that record was a sunny walk on the beach in comparison to the paranoid, off-kilter clang of In Dust.

The eleven songs here are slow-burners in general, interspersed with a few curious shorts, and follow a successful pattern of building from nothing or from a simple, dissonant noise into panoramas of indeterminate scale. In Dust manages to avoid the obvious traps suffered by other records plumbing comparable sounds by always having something to pull out of its shadowed sleeves to throw things off or to build a new platform and change the prescribed point of view entirely. The songs evoke motion—not just spaces—in unexpected ways: take “Cause and Effect,” which paradoxically seems to uncover larger and larger spaces by tunneling ever deeper into some dimly lit internal maze, or in “Calling All Workers,” which follows the plodding rhythm of a heavy bell into a teeming buzz that feels like what might’ve happened to the Durutti Column if Vini Reilly had started making funk. “Workers” before long collides with a powerful, slow piano line that adjusts the song’s inertia with ease and recedes into the bygone spaces hinted at by the dark calls of the bell. The use of piano to inspire a range of moods is expert, and perhaps not better demonstrated than on the distantly sentimental “Dark Thirty,” which builds a Jaws-ish simplicity into a crepuscular world all its own.

It’s true that In Dust does a great job of evoking the pressurizing uneasiness of a great horror or thriller soundtrack, but does the record avoid using these supposed moody evocations as a crutch? The simple success of In Dust is that it is composed considerately enough to move beyond those image-conscious reservations into the realm of real substance, offering depth of composition and including enough unique personality to create a satisfyingly complete and self-contained image out of the feelings it seeks to capture. Always rhythmically and harmonically dynamic, it never seems to rely on an assumed sense of mood, saving itself from the either/or judgment of “hey, doesn’t this sound like X?” by offering consistently compelling, narrative song structures and real tension. Every element serves a purpose in each song’s environment, and considering the fantastic art (by frequent visual collaborator Gustaf von Arbin) and thematically engaging song titles, the record does a great job of painting its own visual themes and not falling back on what references the band may be able to simply assume of their own sound.

Yet I can’t write about In Dust without addressing the vague thematic narrative laid out by the record’s nominal details and accompanying promotional material, which includes a pretty cool little short by Roll the Dice friend and director Frode Fjerningstad. The film finds the band trekking on horseback through a barren, scrubby wilderness, decked in gold rush chic and caked with the crust of fruitless wandering. A sort of vague, disembodied Marxist imagery pervades the whole affair, the blue faces of workers and dirty youngsters haunting the record’s lovely, collaged liners, all posed before lurching factories plonked into strange, naturalistic landscapes. As reported by the band, it suggests not only a loose idea of the changing demands of their personal “industry” as they evolve, but also specifically what the metaphor of industry says about the nature of seeking individual satisfaction, and the primary obstacles that stand in the face of personal motivations.

The imagery of In Dust seems to have stemmed from a simple metaphor crafted by the duo as they began to journey into the wilderness of composition to discover a personal voice on their first record, fashioning themselves as spiritual prospectors. As Pardon explains, “…on In Dust, the mental picture was still the same two guys, but…they had to move into a new area, a more urban landscape, maybe an early industrial situation…” With all of this in mind, I’m really impressed by how the duo manages to successfully translate its own creative process into a subtle imagery that fits its sound without adhering to tropes. But it’s to the continuing credit of In Dust that the record is neither hurt nor necessarily aided by the narrative presented by these two superb composers. Because when it comes down to it, their music is entirely successful in painting these sprawling images on its own. The Imaginary Adventures of Pardon, Mannerfelt, and Co. just happen to be a wonderfully suitable and measured vehicle for the dense and compelling work of Roll the Dice, and In Dust is sure not to leave anyone wanting for a more promising wilderness to explore.