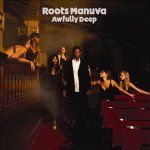 Rodney Smith’s fifth album proper is the biggest mixed bag since Father Christmas’s present sack, and that includes flying sleds, reindeer, and coal as extra variables. Fifty-nine minutes long and split between seventeen tracks, the ideas here are many and indulgent, which means good ones run and grab your attention; bad ones put you in a coma. Fortunately there’re not too many of the latter: despite his middle-agedness Roots Manuva is an affable ringmaster, with plenty of help from friends around the globe to keep 4everevoltion ever-changing. Twelve years after turning heads with Brand New Second Hand (1999), he’s still the deep-thinking, non-conformist prophet from Stockwell, mixing everything from stealth radar to pterodactyl noises and rapping about the ills of society. Question is, has he now reached the age where a loss of edge marks him less as a firebrand and more as a rambling, piss-stained tin collector? Could you handle an hour of being sworn at by a man with seventeen different tins?

No. Roots has still got the eye of the tiger, and hasn’t sabotaged his whole album as he did so imperceptibly with Run Come Save Me (2001). If anything, the politics on 4everevolution have deepened; as pissed off with Clegg and Cameron as everyone else is in Sheffield—but with access to thousand-pound recording software—the rhymes forged here are deep and acidic. On “Skid Valley,” Roots looks down on Broken Britain and douses it with shrieking strings, spitting out everything from gentrifying gentlemen to the backpack snatcher from the riots: ”Life’s so cheap ‘round here / But the cost of living ain’t cheap ‘round here / Eat as much as you can / Get a gastric band / The NHS will save your life / The fat of the land / Mr Minister, we need a plan!” It’s not all litter and train delays, and his frustrations turn spiritual on “Takes Time To,” which mixes drum shards and paranormal echoes to create the first documented attempt at witch-hop. Channeling RZA’s work on Way of the Samurai, Roots brews ghost noises, evil bass, and a skin-crawling drone to discuss rollers who leave their corners to meditate. A sour cousin to the pro-schooling “Here We Go Again,” it shows off the sharp philosophical chops that made Leftfield recruit him on “Dusted.”

Of course, no-one can stay this pissed-off/incisive for long, so between the throbbing screeches and dank hymns Roots likes to pump out some ‘80s breakfast radio. When he turns jolly, he does it full throttle: take the steel drums of “Wha’ Mek,” easy as a Lilt advert, or the disco snap of “First Growth” that works in so many layers it might be the next Red Hot Chili Peppers single (it even steals the opening lyrics to “Suck My Kiss”). Although obviously included to balance out the gloom, these tracks feel just as emotional, and Roots puts as much fervour into “Banana Skank” as he does the chiptune storm clouds of “In the Throes of It.”

Overall the mosaic of 4everevolution holds, with Roots Manuva once more emerging as a rapper who owns more thinking caps than fedoras. He’s also upped his relationship with the orchestra—the Gladiator strings on “Revelation” are a gas, guaranteed to give office drones their balls back—but still knows how to have fun, such as on his thuggish cover of Toddla T’s “Watch Me Dance.”

Though it still could’ve used one more edit before it got posted off to the pressing plant. For all his on-target spits there’s a b-movie proverb just lurking (e.g. ”Some friends are made with sweat / Some are made with blood”), and he probably could have carved one brutal single out of several of the album’s stranger tangents. But as seventeen-track records go, it’s edible, and should qualify him for another wave of buzz when the Mercurys come round next year. Surely they should give him one by now, like Scorcese got a gong for The Departed. If they don’t, who knows—he might come back and give us the Rodney Smith version of Kundun (1987).