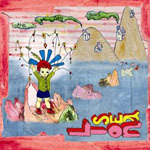 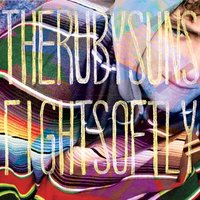 Whereas before the Ruby Suns seemed to synthesize a grand travelogue into a sound equal parts wit and sensitive Pixar adventure (in the two years since Sea Lion, the band’s Sub Pop debut, I’ve come to think of naming a song “Kenya Dig It?” as both brilliant and the first step in taking an attitude toward “world music” that makes that phrase digestible), here they’ve sorta smooshed that all together. If ever there was a perfect way to describe an album like Fight Softly, it would be calling it “pastiche,” which stands less as a judgment than a cold, hard fact about how head rosaceal solar body Ryan McPhun has gone from seemingly earth-borne percussion and exoticized jangle to loud, crowded electronics. Granted, this is growth—movement, actually, which is enough; which is what we want to see in musicians we cheer for, in bands whose previous album seemed to define, and left little room to continue defining, a signature brand. But for as grand as this new LP may get, perhaps finally matching the scope of the wide-eyed music McPhun once sold to Microsoft, seemingly gone is the sense of humor that leant McPhun’s heavyhanding a lightness, or whimsy, or at least a moment of pause after seeing how his last name’s spelled. And: I miss the horns.

McPhun just doesn’t seem to be smiling as broadly as he once was, and so Fight Softly isn’t as infectious, as pimply with melody, as the stuff McPhun wore really shallow cut-off shorts to play before. Maybe “Olympics on Pot” is the funniest thing going here (it’s not that funny), maybe titled like that because it’s built in synth sprints and overpoweringly loud trash can blats interspersed with obligatory pauses and smoky rumination, the whole brought to a sudden photo finish. Thematically, I’m not sure what’s happening (the lyrics are mostly unintelligible, McPhun often twisting falsetto around every dime-fulcrum’d corner, and the retail version comes libretto-less), but the Suns have never seemed particularly held by such concerns, instead counting on the tactile tone and titular pun of each track to convey whatever should be applicably conveyed. Which makes “Olympics on Pot” a more suitable name for, say, “How Kids Fail” (next to “Haunted House” it’s the most straightforward track on the album), if only because its structure is so obvious: a reverent intro of synths accompanies without whiting out McPhun’s untreated voice, him discernibly singing, “I’m coming up warts and all / With everyone here,” and then McPhun flips off the safety on his Mega Man arm cannon, assailing the song’s milquetoast beginnings with a fat, fizzy blast of red electro-girth. Seriously, the sound’s enormous; it isn’t the skeleton behind the song, it is the song: the chorus, the pace, the spark of life and the scythe that shuts McPhun up. “How Kids Fail” acts like a national anthem of sorts; it’s also the easiest song to like out of the available ten.

Of course, in spirit, Animal Collective rear their marketable heads, and just like the Geologist, McPhun gilds what is essentially very simple music and parsable, insanely repetitive song structures with indulgent, scrappy noise. Look to only “Mingus and Pike” (more Star Trek than jazz) or “Dusty Fruit” to witness how McPhun bloats an engaging, even meticulously cut-up, sample or guitar line until it’s bombarded on all sides by waves of static and 30-something tracks of somewhat-harmonizing vocals and echoed overdubs of the same line, only millimeters out of step. “Closet Astrologer,” while at times undeniably gorgeous amidst its corduroy pleats, is still at the mercy of its voracious addenda: fingersnaps, stardust, soaring guitar lines processed to within an inch of their lives, trilling, sprinkly, giggling everything, manically panning drum clacks, so so much falsetto. While “Astrologer” chronicles how thrilling McPhun’s new sense of breadth could be, it’s mostly indicative of how relentless Fight Softly is.

A telling sign is how McPhun employs silence throughout; in almost every track, the onslaught drops out for a brief moment of respite, an oasis of nothingness before another sandstorm and getting shit in your eyes. The Suns seem to understand that at the heart of this listening experience is an almost religious attentiveness, something that was never really part of enjoying Sea Lion. Which is my point: the heaviness of these new arrangements seems to purposely belittle McPhun’s once effortless grasp of melody. While rarely graceless and often impressive (“Two Humans,” worth noting, develops into something sexy before going for broke), everything on Fight Softly just seems too much. There’s a lot that’s pretty here—but there’s a lot.