1. I Saw Her Standing There
2. Her Body Smells of Cinnamon
3. We All Carry Our Ghost
4. Chasing Dandelions
5. Those Angel Wings Look Comfortable
6. My Tricycle Can Float from Planet to Planet
7. She Danced the Waltz
8. Where the Wild Things Are
9. She Played This Song for Me When I Was Five
10. I Noticed You Hovering Above Me
11. The View Looks Good From Up Here
12. Underwater Playground (Starfishes are invited)
13. The Boy Who Gazed at the Eclipse
14. Who Did You See in the Mist?
15. A Sunrise (and They Turned into Stones)
16. Now I Turn To You 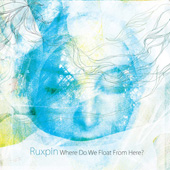 Where Do We Float From Here?

You can blind-buy the majority of the n5MD roster and confidently throw away your receipt—they’ve yet to put out a duff release, and this newest LP from Icelander Jonas Thor Gudmundsson does little to buck that trend. In fact it doesn’t buck it twice: the label first published Where Do We Float From Here? a year ago on their En:peg Digital catalogue, and are now sold on giving it the full physical honours. Ruxpin, to those who don’t know his work, is no teddy bear, and stays one step ahead of the snowblind overtures the world expects from his country. Perhaps too frumpy to fit the national stereotype, Where Do We Float From Here?—title aside—offers the same gentle jolt to preconceptions of Iceland as the volcano did that fucked everyone’s flights up. It’s still got all the crystal footsteps and dark snow you could hope for of an island country, but Ruxpin’s prowess with IDM beats means his fairy tales are a little more caustic, demanding a slightly stronger drug accompaniment. And that doesn’t mean just getting twice as stoned as you did for the first múm LP.

There’s enough ideas on Where… to make its sixteen tracks seem pregnant, and each four-minute brainstorm could easily spawn a little EP of its own. The gasping, the ambience, the lilting, and the compressed drones are each adjusted to push the electronic meteorology feel to the max, but Gudmundsson ensures that each suite stays crunchy, never quoting the easy way out on his layerings. Still retaining the techno acrobatics he’s clung to since 1999, Ruxpin sets up lightstorms as bustling as their titles, with numbers like “Underwater Playground (Starfishes are invited)” sounding like the Cocteau Twins with hiccups. The track’s garish Möbius strip makes for one of the album’s more brash moments, but it’s saved from the very real possibility of being a test-bed Nordic rap song by some cleverly employed bulb effects. The heavier moments like this get countered by weightless electro with a Tinkerbell twist: “We All Carry Our Ghost,” “I Saw Her Standing There,” “She Danced The Waltz.” There’s plenty of them, and they all sound like the opening line of sonnets.

How Gudmundsson inches his way above the fog of left-field electronica is by stringing several of his tracks into movements, leading you in and out of sparkly tunnels. “Chasing Dandelions” is as valiant as M83 after a binge on John Hughes movies, its shuddering as calming as a dunk in the tub. It’s therefore the perfect set-up for “Those Angel Wings Look Comfortable” which rips you out so quick you’re almost breathless, the harsh IDM edges screaming “Everyone out of the pool.” The changeover is a stinger, but Ruxpin makes you fall for the powder snow and disco strobes before his four minutes are up. These sequences—there’s about four of them across the albums hour run time—are what heighten the occasions when the laser harp droplets and breakbeat snaps get too tangled, adding a philosophy to the more estranged piano experiments/melancholy glitching. His best moment, though, is arguably his calmest: after the soundtrack-to-Commando clone of “A Sunrise (and They Turned into Stones),” Gudmundsson fades out with “Now I Turn To You”; a sumptuous galaxy that’s pudding-sweet, the planets just glacé cherries. While much of Where…‘s ultimate pacing might mean it’s less emotive than the n5MD median, tracks like these raise the bar, hopefully hinting that Ruxpin’s seventh release will be an EP so starry it can blind an astrologist. That’ll teach them to go stargazing in Iceland.