Other Records by Ryoji Ikeda 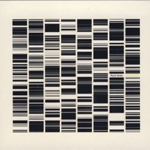 The title Test Pattern refers to a program used by Japanese sound artist Ryoji Ikeda that involves converting pictoral, textual, and other non-musical media into binary codes that form bar patterns such as the ones on the album cover. These patterns are then reconfigured into audio data and rearranged by Ikeda. The second in his ongoing Datamatics project that began with 2005’s outstanding Dataplex, Test Pattern is, like its predecessor, ostensibly concerned with the nature of “data.” It probably makes a little more sense in Ikeda’s multimedia installations (which I’ve unfortunately been unable to see for myself) but with this release his conceptual apparatus seems to carry a lot more water: Ikeda is basically breaking down stimuli from all different senses into binary 1’s and 0’s. It’s a frightening idea: while other current process-generated and musique concrete artists like Matmos have mapped the chaotic movements of nature onto electronic music Ikeda’s essentially doing the opposite: taking any outside source and reducing it to digital matter.

From a somewhat less technical standpoint, Test Pattern is a bit of an audacious title: coupled with the warning on the front against playing at loud volumes, it might seem at first to be more of a provocation than a rigorous study on the nature of sound. Turns out it’s a bit of both, and that warning is serious: Test Pattern contains enough high-pitched digital noise that it could actually damage your eardrums, so you know, play safe kiddies. Still there’s no denying that however much the sounds here are closely rooted in basic sine waves, this is provocative; one of Ikeda’s major accomplishments may be that he’s debunked the myth that noise music has to be based in chaos and serendipity.

One of the things that strikes me about that title is that test patterns, at least for television, have always been a way of fine-tuning levels as opposed to an artistic end in themselves, which brings me to the main crux of my problem with Ikeda’s latest. In some ways it feels like he’s trying to create a new language for electronic music without actually articulating anything within it. This could be another way of saying that the album is overly academic, or that he sounds like he’s on his way to creating something better, but I feel like both those complaints are a little patronizing considering the degree to which Ikeda is breaking new ground here. To create a new language in music, to the extent that’s even possible, should theoretically be an end in itself. Perhaps the root lies more in Ikeda’s tenuous relationship to techno music. On the one hand, even by the ultra-experimental standards of the micro-sound label Raster-Noton, Ikeda is an outsider. His rhythms fly past in a blur, while his source sounds rarely last for more than a fraction of a second—completely abolishing the basic sense of groove that even the most minimal techno has. On the other hand, the steady pace overall and the basic rhythmic patterns still belong properly to techno music. Even Ikeda’s basic premise of refining sounds at the micro-level and arranging them in a minimalist framework has been a basic tenet of electronic music, especially in the last decade.

All of this is not to say that Test Pattern sounds too much like techno or not enough, merely that the resemblance can be a little distracting. And it’s distracting precisely for the reason that Ikeda’s music itself is so distinct and alien; why should an artist working so defiantly on his own terms resort to mapping out his sounds onto a techno framework? It certainly isn’t simply a matter of Ikeda consciously or un-consciously moving towards more mainstream sounds, since at the level of pure aural experience this is clearly more ear-shattering, intense and uncompromising towards the basic principles of harmony than anything he’s done before. It’s kind of like playing Justin Timberlake covers on a set of garbage cans and household appliances; it’s not even remotely “pop music” per se, but there’s no getting around the comparison. Perhaps it’s this focus on the sounds (the “data”) that has steered him away from concerns over structure, but as a result the album tends to default towards minimal techno. This is what sets it apart from Dataplex, which not only had a wealth of shifting structural movements, but set them across a fascinating narrative where the album progressed according to increasing complexity and, eventually, a sense of life and character (even a weird kind of humour) within its binary origins.

Still, there’s no denying that Ikeda is one of the most resolutely physical electronic artists out there. One of the most satisfying ways of listening to Test Pattern is setting up the oscillator visualization on one’s Windows Media Player. While the vast majority of music contains so many overtones that the scope is a homogeneous mess of vertical lines representing the entire spectrum of pitch, Ikeda’s music is so pure and structurally-invested that it translates into some of the most remarkable patterns. From the thick mass created by the high-pitched tones, to the deep, wide valleys and peaks of the bass tones, you can actually witness the way the music translates from aural to visual patterns—presumably the reverse of how Ikeda made the music in the first place. There are patterns that even go beyond the mere shifting of pitch and rhythm: “Test Pattern #0010” conjures up a shape that looks something like a glissandro in music notation, then follows it with a sound that produces a straight-line across the scope with a single, sharp dip in the middle that’s as good an indication of the way this music threatens to penetrate your eardrums as any. Likewise, “Test Pattern #0100” with its skittering high-pitched blips over deep bass hums conjures up a pattern that makes it seem like the sharp blips are actually moving across the wide crests. “Test Pattern #1010” features low bass hums that actually appear static for a few seconds; this is an illusion akin to freezing time, since the idea of a scope is that it’s always moving across the horizontal plane.

Even as a purely auditory experience, Test Pattern can be a fascinating experience. The rhythms exist on such a micro-level that, rather than creating hooks through the relationship between elements—as most techno and even left-field electronic/ambient records do—the music seems to have an effect on a physical and subliminal level. This effect is only heightened by the constant presence of cross-channel panning that makes it feel like the digital noise is actually moving right through your head; something that Pole has always strived to do but never so far outside the language of dub/techno as here. For those who haven’t encountered Ikeda’s music before, Test Pattern will inevitably make an impression, be it positive or not. Now if I can only get that ringing out of my ears.