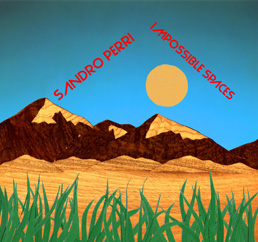 Sandro Perri is every bit the burgeoning cult figure. Physically, his tall-dude-in-plaid look lands him squarely between the grey presumptions of being a musician or a record-store nobody. Collaboratively, he tends to morph into whatever role (band-mate, producer, songwriter) his fellow musicians require. Such qualities might make Perri ideally “of the people,” like a good neighbor helping friends record in a post-major-label hierarchy, but it’s his chameleon-esque musicality that, through twists and turns, habitually strengthens his cult-like fanbase as opposed to expanding it.

Granted, Impossible Spaces does carry an aura of exclusivity about it but only because these songs don’t compromise on Perri’s vision, which on this occasion feels like building blocks of an existential, sci-fi crisis. A pervasive disquiet probes at these melodies and ripples its oft easy-listening attributes into the restless variations of a prog record. As surely as a devious scope hides behind such benign tunefulness, a truth lies in wait: Impossible Spaces‘ exclusivity is actually veiled isolation. Perri recognizes the tides of transformation at the onset of opener “Changes” and accentuates the discovery with a deluge of instrumental change-ups and adventurous time signatures that culminate in a sweep of bubbling synth and looped rhythms. At a recent show in Ottawa, Perri referenced the track’s spacey conversion by joking that “Changes” can never be performed the same way twice. It’s easier to take that statement at face value in the context of a live-band on tour than within the pristine confines of Impossible Spaces, a record Perri admits taking “several years” to produce.

Alas, his new LP’s great triumph is indeed its airiness: after creating a song-cycle with such painstakingly unique architecture, there remains ample space and argument for improvisation. Considering how a table of elements as combustible as Perri’s looks on paper, it’s remarkable that flurries of flute, lurking bass clarinet, moody synths, and drum machines can produce such interplay—off-kilter yet with each component decidedly in its right place. The acoustic and found-sound intricacies behind the rhythmic “Love & Light” get steamrolled by a slow-mo, alien synth while the breezy ten-minute jam “Wolfman” gains unexpected muscle not through its synthetic backing but by way of some dense horn and string action. Like a modern-day Astral Weeks (1968), Impossible Spaces has a multitude of anchors that don’t necessarily recognize each other. There’s no predicting which songs will spiral into bouts of inspired lyricism and which might remain teasing but stoic nuggets. And yet it all unfurls with a casual flow, as though its mastermind has been scouring the archives of elevator muzak for inspiration.

Although Impossible Spaces will no doubt bolster his fanbase, Perri deserves to feel a bit chafed if this labor of love doesn’t catapult him up Constellation’s ranks. Whatever these songs lack in immediacy, they rebound with an artistry—free of needless complexity and highbrow trappings—which isolates Perri from any obvious colleagues. There’s stock in that, and Impossible Spaces represents another “I told you so” waiting for hindsight to turn up.