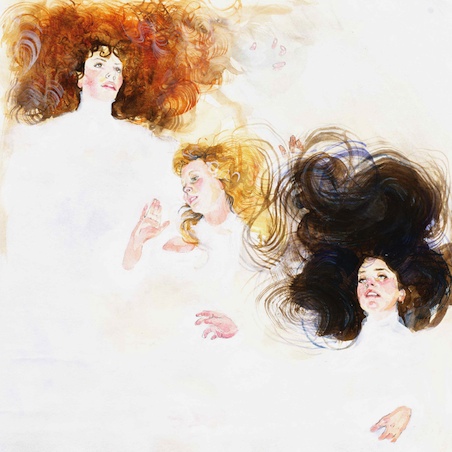 Tambourine players are, for the most part, just people with a real jingly on-stage pass. An unexpected corner of the stage for two exceptionally challenging songwriters, guitarists, and vocalists to dwell, the backup-singer sidelines of San Francisco’s the Fresh & Only’s are precisely from whence Grace Cooper and Heidi Alexander emerged in 2008 as a highly contrasting duo. With the addition of friend Roxeanne “Roxy” Brodeur (formerly of Pillars of Silence) lending a crisp and spritely touch of percussion, the Sandwitches congealed as a trio capable of developing polarities in their music as confusing as they are compelling.

While playing with notions of comforting and discomforting, good vs. evil, empowerment and powerlessness, the most superficial of contrasting pairings are Alexander and Cooper themselves. Opening for Sonny and the Sunsets last summer, on stage the group played up their differences: Cooper executed the songs with an occasionally cracked smile, but held fast as a Spock-like lead, her black hair chopped short, her black mini-dress even shorter, like hot off the first season of Melrose Place; meanwhile Alexander flowed in a tousled sea of red hair and billowy dress, the loose straps falling so frequently she realized we were all too distracted by the impending “wardrobe malfunction” and just gave up, laughed, flashed us her boobs, then tied her straps in a huge knot and sallied forth.

There’s nothing effortless or tightly executed about the Sandwitches’ music. While it’s easy enough to recognize influences and elements from ’60s country and surf rock in their music—the clap-like rhythms; the dolphin-high lilts and climbs of vocals; the gaseous clouds of Elvis-esque “wuh-huh“s; nautical imagery laced throughout—it’s a stormy shore they’re singing from, and a post-apocalyptic husk of left-behind love they’re crooning about. Like a half-tuned station picking up waves of pure, remastered déjà vu, Mrs. Jones’ Cookies, their second full-length, is a curious amalgamation of the eerily familiar, retro, simple, and elusive. It’s as goosebumps-inducing as listening to Carey Mercer for the first time.

Throughout the record, the Sandwitches wield various mythical and trope-y images: witch, ghost, siren. The singing follows suit: sultry in opening track, “In the Garden”; hauntingly in unsettling, off-key tracks like “Black Rider”; and frequently calling across the sea for someone to come to them, or, heartbreakingly enough, to come back—and not to return forever, but to just keep coming back, as if they are all too accustomed to people they love just riding in and back out again on currents, mimicking a sobering tide.

These tides carry their aesthetic as well as their subject matter, their songs seemingly caught in a state of flux. Sometimes the record flutters, wavers mirage-like, or, in my favorite instances, hovers like a gestural sketch of a song with elements so barely held together they’re on the brink of splintering, giving way to the shitty recording device’s crackle. Just like rivers and that ole, purported impossibility of never being able to step into the same one twice, even the sentiments behind the songs aren’t immutable, and like any self-aware art, meanings change over time as readily as the album is replayed.

Mrs. Jones’ Cookies plays with that transformative foreboding; think the turning of weather or fruit, bright colors twinged with spoil. Keys slide into dark places and shadows spring up from the most unexpected sock-hop-like tracks. True, an uneasiness exist over it all, pockmarked with Cooper’s yelps of raw longing; a high vocal gulp or plea lacks in finesse as she yips and slurs words formed at impossible altitudes, her imperfect urgency immediately accessible. No one sings like that, or so one could think, and she does it amazingly well. But goddamn does she convey just how difficult it is to sing like that.

With all their caustic dualities only swelled since the band’s debut How to Make Ambient Sadcake (2009), and throughout three 7-inches, a 12-inch, and a smattering of compilations worth of material, the Sandwitches have created some of the most unusual and challenging music I’ve heard and wrestled in years. It’s taken just about that long for me to digest what I love about the band, why I love their music, and, even what the hell I’m listening to exactly. The latter still not being something set in stone. But, whatever their sound is, it’s something drastically different, and, a comment not to be taken lightly, brave as fuck.