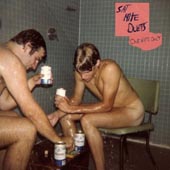 One Nite Only EP

Mired in the place where a heart would be (if the Chicago Winter had a heart), Windy City residents are forced to cling to whatever might keep extremities from growing purplish and limp: warm clothes, warm food, all warm everything. Me, I retreat into a cocoon of east coast rap as soon as the wind chill starts to drop temps below 20—it’s fuel for my soul’s furnace. So then, it’s fitting that a handful of dudes who went to high school together in the even-more-frigid city of Milwaukee should remind me that ramshackle Americana can radiate warmth just as strongly.

It sounds like faint praise, but One Nite Only is pleasurable in the simplest of ways, hitting the same pleasure centers as do nights amongst good company, the Food Network on mute in the background, everyone a little too drunk to assemble much more than adroit shit-talk. I mean, the line that juts out early on during opener “One Nite Only” is just a pairing of two things to which no one is opposed: “Cool party / Friendly guests.” This is what Asher Roth meant on “I Love College,” but Sat. Night Duets replace his douchey complacency with genuinely fun energy and guitar riffs that aren’t lifted from “Say It Ain’t So.” “BF Season” is the sexy sort of summer jam for which we in temperate climates yearn in January; “Funeral on 6th Street,” on the other hand, proves they can do somber stuff that aches like a poked bruise.

In the meager amount of coverage Sat. Nite Duets have received in their brief existence, the most notable is a small write-up from GQ‘s Ana Marie Cox, which pegs the band as some Pavement-revivalist act. She cites “the spoke-shouted-sung lyrics, the droney guitars, the sense that at any minute the band might just stop playing, put down their instruments and have a smoke,” which is just the variety of romanticism that clouds one’s judgment and allows for false equivalencies to spring from bullshit. Granted, the mythos surrounding Pavement in 2011 is pretty ridiculous; tethering every gang of amiable guys with a vaguely slacker-ish ethos and jangly guitars to the Biggest Indie Rock Band of the ‘90s (as proclaimed by historic revisionists) is tremendously counterproductive. There’s so little pretension present in Sat. Nite Duets’ music that it begs to be thrown on like an old flannel shirt, unhaunted by Malkmus’s now-Leviathan specter.

So One Nite Only sounds like a lot of things, but what it feels like is walking through the door of a warm apartment after a 25-minute trudge through the snow to retrieve Korean food. Its pleasure is that mundane, that comfortably unremarkable. Sometimes that’s all the universe will give you in one day; sometimes that’s all you need. Sometimes it’s just not that complicated, stupid.