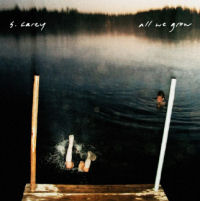 To date, the most enjoyment I’ve reaped from Bon Iver is probably in emphatically pronouncing it “Bon Eve-aaaaaaaaaaaaair” with a big roll on the “r” and a small head shake at the end. Which is to say: yeah, a fair lot of enjoyment. And few things make a girl of my particular jib-cut similarly shiver down to the girlyparts like the idea of a drummer churning out a solo album. Even when it’s not from a naturally curiosity-generating mystery grab-bag like I imagined Bon Iver’s drummer to be (I barely remember he had drums! What’s gunna happen!?), it is a promise pregnant-to-bust with percussive bombast and un-impinged snare solos. Never mind that niggling suspicion that I’ve entered into a hush-hush contract, however prematurely signed, to accept that certain compromises are bound to be made with regards to other content-driven details we don’t expect most drummers to worry their pretty little heads about—a small bunny-sized sacrifice if you will to the gods of sweet-ass beats and potential party mixtapes that could please even that one boring ex-roommate or coworker you still invite, regardless of how they keep scaring away all the hip dudes with Linkin Park or Kings of Leon name-drops. Anyway, point being: I fully expect an album I may not hold counsel with in my more dire, soul-sussing moments, but at the very least something I can contentedly listen to on a long walk home. Something I can happily pretend all the people running and walking their dogs are keeping time to.

So it was, with an intrigued spirit and a foot hovering, waiting to strike down in just such enthused tapping, I put on Sean Carey’s solo project, All We Grow. And to no one’s disappointment but my foot’s, All We Grow is…just not that kind of an album. Having been patch-worked together, layer by layer, over a span of two years, Carey’s managed to release something not just contemplative, but something showcasing a similarly surprising vocal talent capable of warm gestures and some sincere cardiac stirrings.

An atmospheric “tuning up” with unexpected clarinet and woodwind ambience, wavering as it grows—that’s not how I expected this to go down. This intro song quickly establishes itself as an intro and from there develops in interesting, continual ways. There are three, solitary low beats half-buried in the background to usher in the second half of the intro; surprising, deftly handled vocals melt in for the last minute and a half, moving over simple guitar and string-by-string notes plucked from chords. It’s all key shifts and small movements that are over before they’ve begun, whetting the appetite not for more “sweet-ass beats” but, uh, some more sweet-ass vocals? Seriously.

If the first is an exercise in atmosphere, second track “We Fell” is an exercise in crescendo. A falsetto weaving around a low keyboard pressure—I wait for the drums but the rhythm is created by piano and choral texture, solely. The third track, “In the Dirt,” has more percussion than we’ve yet heard (if you’re following along), with a knocking, a clapping—again, not drums—all of them slow-paced yet balanced with a subtle but really easily accessed elevation. “In the Dirt” is all about knowing: a rhythm that knows when to retreat to other elements; vocals that know when to retreat to rhythm. And “In the Dirt” knows that crescendos are best defined by simple partitioning: a shaker wades in sediment of vocals and keyboards set to a nice, resilient “clarinet” that hovers in at the mid-way mark to create slight variations, building frictions, elations, before one last push of Carey’s voice and then ten whole seconds of deserved silence.

“Action,” halfway through the album, is the first instance of real rhythm play—snare edge strikes, meshing with sparse post-rock, fuzz-slathered guitar strums and a few choice shrieks from the string section, build texture alongside blossoming reverb. “In the Stream” hones in on Carey’s voice as the textural focus, his mouth closer than ever, the buzz of motion around his tongue clearly audible. Not much else: a slow bass beat, drum kick; maybe he’s too loud on the sucking inhales, but a surprising entrance of female backing vocals erases all concern.

Carey’s voice is the only element that doesn’t really offer much variation, rhythm-wise, throughout All We Grow, maintaining the same wandering stroll as it passes through each of his soundscapes. But there’s enough fluctuation in these soundscapes—a violin playing around in the background, offering up a few squeaks; a bicycle bell or triangle tinkling; a few cymbal strikes and rolls—that I don’t really mind. Especially when the soundscape is “All We Grow,” a combination of all his soundscapes, offering rises and mumbling lower registers, metallic slices paired with warm, electric guitars, elements that develop and exchange with other elements while voices layer nearby or behind or thereabouts in ethereal, less important ways.

Carey knows when to maintain, and he knows when to bend his rules, and he knows when to not sing, when to let the background develop the song’s story of its own accord. His songs unfold with a linear quality and attention to each fragment as each fragment emerges and takes shape, even with more traditional chorus/verse arrangements. You can hear each layered texture as if it’s peeling back for individual inspection—and they peel and reveal with increased interest and exponential reward each listen. Songs develop as stories, not as excuses to push or house drum lines the Bon wouldn’t let him execute. And if he’s trying really hard to accomplish that, you can’t hear it.

No, a savory beat fest this is not. Nor is it a Bon Iver album. It’s an album that uses only a respectably limited palette of elements to reach frankly beautiful ends. The most potent components of this album aren’t instruments, they’re practices. Chock this up to Carey’s timing: vocal interest not in diversity or range, but in Imogen-Heap-like shifts of layers, volume, and key, in control over proximity, in clarity and phrasing. Down to the near-microscopic details, down to the faintest rough edge on his smoothest vocal landscapes, down to the last moments on the final track: it’s a self-sustaining, well-rounded album that stands well without Bon Iver—especially without a drum solo.